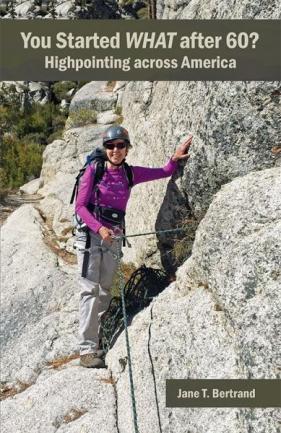 When Jane Trowbridge Bertrand turned 60, she was itching for a challenge. Come meet her when she presents her book, YOU STARTED WHAT AFTER 60? Highpointing Across America.
​
​The three Trowbridge sisters had a tradition of doing something noteworthy on the important birthdays, and she was searching for what that would be. Because hiking opportunities in her adopted state of Louisiana are nonexistent, she struck on the idea of climbing one mountain in every one of the 50 states. From the start, she ruled out mountains that would require technical climbing, especially in snow; no harnesses, ropes, carabiners, helmets, crampons, or ice axes for her.

At the time, she had never heard of highpointing, a fast-growing pastime with its own club, foundation, newsletter, and annual convention.

Bertrand began her highpointing quest without a master plan. She had no idea how long it would take, who would go with her, how much it would cost, and how she’d hold up on the more challenging mountains. Rather, in no particular hurry, she took advantage of opportunities as she traveled in connection with her work. Yet as she hit the mid-sixties, with only 11 states completed, she sensed the need to pick up the pace. She also realized her strategic mistake in starting with easy states, leaving the truly challenging ones found west of the Mississippi to her late sixties.

Initially she felt she would probably complete 40 true highpoints, though she planned to undertake an alternative hike in the others, to visit all 50 states. When she reached that number, the phenomenon set in: “If I could do 40, why not 41?” “ If 41, why not 42…?”  Eventually she reached 46, despite a broken wrist and an acute attack of back pain. As she researched the remaining four highpoints, she realized they required more fuel than she had in the tank. Yet it had been, well, one of the highpoints of her life: traveling to discover new places, experiencing the exhilaration of the great outdoors, pushing her own physical limits, and sharing ​this adventure with the people who had meant the most to her over a lifetime. 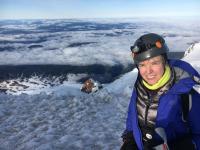 Jane Trowbridge Bertrand is a professor at the Tulane School of Public Health and Tropical Medicine. A Maine native, she moved to New Orleans over 40 years ago where she and her husband Bill raised their children, Katy and Jacob. Her recurrent travel to Africa in connection with international family planning work generated many of the frequent flyer miles that made this highpointing pursuit possible.

You Started What After 60? Highpointing Across America (Paperback)