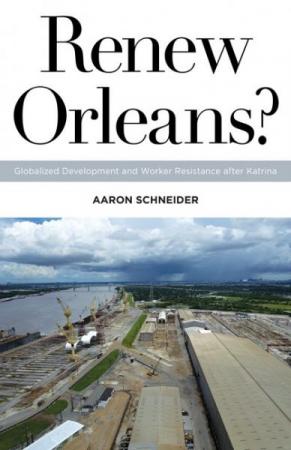 Please join us for a presentation and signing with Aaron Schneider featuring his book, RENEW ORLEANS? about the post-Katrina reconstruction of the city, especially the reorganization of economic activity in areas such as construction, tourism, and manufacturing. To explain these changes, the book focuses on political change, analyzing the myriad boards, commissions, public benefit corporations and other entities to understand political transitions both before and after Katrina.

Like no other American city, New Orleans since Hurricane Katrina offers powerful insight into issues of political economy in urban development and, in particular, how a city’s character changes after a disaster that spurs economic and political transition. In New Orleans, the hurricane upset an existing stalemate among rival factions of economic and political elites, and its aftermath facilitated the rise of a globally oriented faction of local capital.

Aaron Schneider shows how some city leaders were able to access fragmented local institutions and capture areas of public policy vital to their development agenda. Through interviews and surveys with workers and advocates in construction, restaurants, shipyards, and hotel and casino cleaning, Schneider contrasts sectors prioritized during post-Katrina recovery with neglected sectors. The result is a fine-grained view of the way labor markets are structured to the advantage of elites, emphasizing how dual development produces wealth for the few while distributing poverty and exclusion to the many on the basis of race, gender, and ethnicity.

Schneider shows the way exploitation operates both in the workplace and the community, tracing working-class resistance that joins struggles for dignity at home and work. In the process, working classes and popular sectors put forth their own alternative forms of development.

Aaron Schneider is Leo Block Chair and associate professor in the Josef Korbel School of International Relations at the University of Denver. He is author of State-Building and Tax Regimes in Central America.

Urban development after disaster, the fading of black political clout, and the onset of gentrification

Like no other American city, New Orleans since Hurricane Katrina offers powerful insight into issues of political economy in urban development and, in particular, how a city’s character changes after a disaster that spurs economic and political transition.