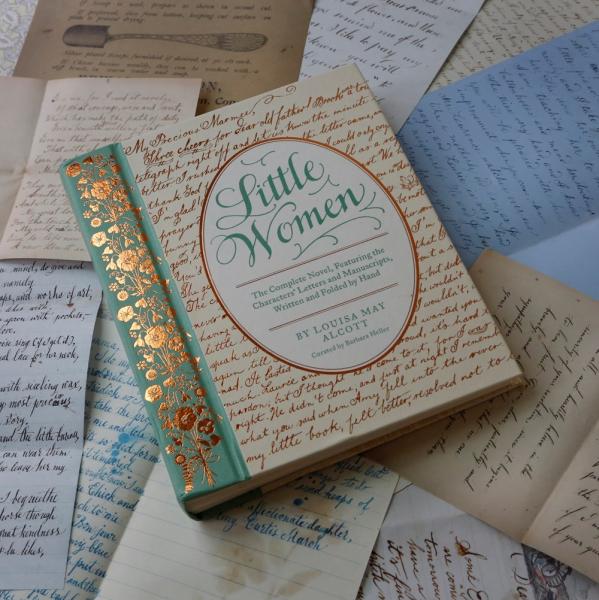 Join us for a booksiging with Barbara Heller celebrating the launch of her brilliantly curated new deluxe "letter book" edition of Louisa May Alcott's LITTLE WOMEN. Heller and a team of New Orleans-based scribes have imaginatively created many letters in the novel, and the girls’ newspaper, The Pickwick Portfolio, to look as though they were handwritten by the characters in the 1860s. Every element is hand-folded and tucked into glassine envelopes sprinkled throughout the story. Heller and the scribes, who perfectly captured the spirited emotion of each character in Little Women, will all be signing the books together.

Barbara Heller was inspired to create the letters in Pride and Prejudice (Chronicle Books, 2020) and Little Women, by her own desire to hold those letters in her hands. Her career in film and television encompasses finding furnishings and props for many shows including The Americans and When They See Us; location managing films for Francis Coppola, Nancy Meyers, and Barbet Schroeder; and directing award-winning short films that have played at festivals around the world (Cannes, Berlin, Sundance).  One of those films, Little Women in Transit, is based on a short story written by her sister Milly, about three sisters in the backseat of a station wagon on a family car trip. To satisfy her curiosity, Barbara reported on why hotels fold the end of the toilet paper into a point for NPR. She graduated from Brown University with a degree in English Literature and lives with her son in New York City.
Patti Adams (Theodore “Laurie” Laurence) is a New Orleans artist whose work is defined by her wide-ranging interests in calligraphy, hand lettering, book illustration, portraiture and painting in oils and watercolor. Her calligraphic work has appeared in national publications. She teaches calligraphy, gold leaf gilding and watercolor at the New Orleans Academy of Fine Arts. Patti has a parallel creative life as a professional flutist with the Louisiana Philharmonic Orchestra.

Debra Fleming (Meg March, Jo March) was introduced  to calligraphy over 35 years ago and discovered a lifelong passion. Studying, supporting and creating art has been her focus since that first calligraphy lesson. Her love of writing and books led her to work as a library associate with the Jefferson Parish library. In addition to being a member of the New Orleans Lettering Arts Association, her work has been included in numerous exhibitions.

Vincent Mitchell (Mr. March, Mr. Laurence, S. Hale, Mr. Laurence’s monogram)
has always been fascinated by codes, cyphers and glyphs, particularly from Egyptian and Mayan cultures. He studies optics and music, and taught piano lessons in Haiti. He apprenticed with the Seattle based artist Trimpin during the building of a major art installation, before returning to New Orleans where he and his wife Yvette Rutledge formed a band to play their original music.  For the last seventeen years, they have worked together as hand-lettering artists in their shop, Mystic Blue Signs.

Yvette “Eve” Rutledge  (Beth March, Amy March) has been a professional lettering artist since 1973, when she began painting signs and researching letterforms in out-of-print library books. She formally studied typography, book design, calligraphy, and hand engraving and has freelanced for clients such as UC Press Berkeley and Pennyroyal Press. Eve teaches lettering and engraving at conferences and colleges, establishing the Center for the Lettering Arts with her husband Vince Mitchell at their shop Mystic Blue Signs in New Orleans, where they also compose original music for their band.

Eugenia Uhl (Marmee, Hannah Mullet) is a calligrapher, calligraphy teacher, bookmaker and photographer in New Orleans. Her photographs have been featured in Departures, Southern Accents, Metropolitan Homes, House Beautiful, Essence, Travel & Leisure and Everyday With Rachel Ray. In addition, she has been the culinary photographer for eight cookbooks including Commander’s Kitchen and Galatoire’s. She is most inspired by combining calligraphy with photography in hand made book form on themes of light, place and shape. 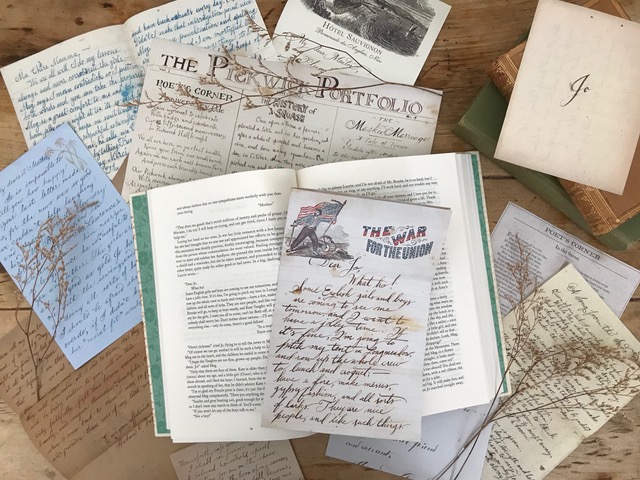 This special edition invites fans inside the world of the March sisters. It includes the full text of Little Women, plus gorgeous, removable replicas of the characters' letters and other writings.

For anyone who loves Little Women, or still cherishes the joy of letter writing, this book illuminates a favorite story in a whole new way. Louisa May Alcott's classic tale follows the March sisters as they come of age, and these unforgettable characters come alive in their letters and other writings. When Laurie invites Jo to join him for a picnic and "all sorts of larks," the unbridled joy of their friendship shines through. Each of the girls' personalities is perfectly encapsulated in the letters they pen to Marmee. And Jo's heart-wrenching poem "My Beth" speaks to the profound bond between two sisters. As you read this deluxe edition of the novel, you will find pockets throughout containing replicas of all 17 significant letters and paper ephemera from the story, re-created with beautiful calligraphy and painstaking attention to historical detail. Pull out each one, peruse its contents, and allow yourself to be transported to the parlor of the March family home.

This deluxe edition brings to life the letters exchanged among Jane Austen's characters in Pride and Prejudice.

Glassine pockets placed throughout the book contain removable replicas of 19 letters from the story.