"A vital, essential addition to the shelf of great books about New Orleans."--Kircus Reviews 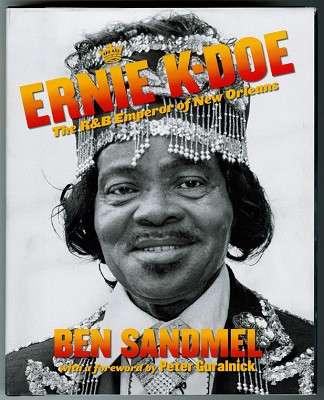 Join us for a special evening with Ben Sandmel celebrating his long anticipated biography, ERNIE K-DOE: The R&B Emperor of New Orleans.

May 1961, and one tune was sitting pretty atop both the R&B and pop charts: “Mother-in-Law” became the first hit by a New Orleans artist to rule black and white airwaves alike. Ernie K-Doe was only twenty-five years old, and his reign was just beginning.

Born in New Orleans’s Charity Hospital, K-Doe came of age in a still-segregated South. He built his musical chops singing gospel in church, graduating to late-night gigs on the city’s backstreets. He practiced self-projection, reinvention, shedding his surname, Kador, for the radio-friendly tag K-Doe. He coined his own dialect, heavy on hyperbole, and created his own pantheon, placing himself front and center: “There have only been five great singers of rhythm & blues—Ernie K-Doe, James Brown, and Ernie K-Doe!” Decades after releasing his one-and-only chart-topper, he crowned himself Emperor of the Universe. A decade after his death, lovers of New Orleans music remain his loyal subjects.

Journalist Ben Sandmel takes readers backstage in this intimately framed biography. Here are all the highs: Billboard raves, rock-star parties, a string of early hits that remain local staples. And here are the lows: profligate spending, go-nowhere releases, and years lost to alcohol. And here, too, is the magical second act: a radio show with a cult following, a new generation of protégés, and a fresh lease on life—and love—with Antoinette Dorsey Fox.

In its broad outlines, K-Doe’s story parallels that of his beloved, beleaguered city. He rose, fell, and rose again, weathering storms and lingering long after most considered him down for the count. In the end, he literally rose from the dead: an eerily lifelike statue of K-Doe held court at his castle, the Mother-in-Law Lounge, for years after his 2001 passing.

Ben Sandmel is a New Orleans–based journalist, folklorist, drummer, and producer. His articles about Louisiana music have appeared in national publications, including the Atlantic and Rolling Stone, and have been anthologized in such collections as Da Capo Best Music Writing 2000 and From Jubilee to Hip Hop: Readings in African American Music. Sandmel has written liner notes for over a hundred albums. He is also the author of Zydeco!, a collaborative book with photographer Rick Olivier. Sandmel has worked for the Louisiana Folklife Program as a field researcher and writer documenting traditional music and occupational folklore. He produces the Allison Miner Music Heritage Stage, an oral history venue at the New Orleans Jazz and Heritage Festival. He has produced and played on four albums, including the Grammy-nominated Deep Water by the Cajun/western swing band the Hackberry Ramblers