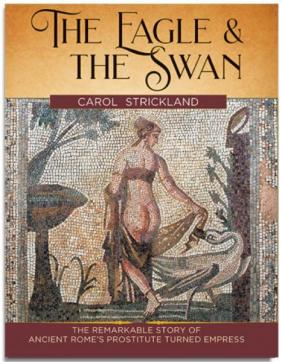 Come meet author Carol Colclough Strickland, a New Orleans native and Ben Franklin grad, when she presents and signs of her historical novel, THE EAGLE AND THE SWAN: The Remarkable Story of Ancient Rome’s Prostitute Turned Empress. Set in the late Roman Empire in 6th-century Constantinople, the book gives voice to the most maligned woman of antiquity, Empress Theodora, who began life as the bear keeper’s daughter in the circus before attracting the attention of a soldier who became Emperor Justinian.

Within a manuscript that has not been read for a millennium and a half, there are secrets that will rewrite the history of an Empire…

It is AD 518 in Constantinople, capital of the glorious Byzantine Empire. A beautiful courtesan famed for her interpretation of the myth “Leda and the Swan” dances in the Imperial Palaces; stirring hearts, rousing desires, and indelibly changing the course of history. This woman, Theodora, was a circus performer and prostitute before catching the eye of an ambitious military officer. The soldier and the swan dancer set out on a treacherous path to power that leads all the way to the throne. The events that ensue, amid the struggles and politics of a society in flux, leave a city in smoldering ruins.

While researching the Hagia Sophia, a spectacular basilica built by Emperor Justinian, Strickland discovered references to his partner, Empress Theodora. In his Secret History the era’s official historian Procopius vilified Theodora as immoral and sexually depraved. Now the story of Theodora—the least understood and most maligned woman of antiquity—has been recast to give her a voice. 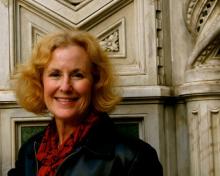 Carol Strickland, a cultural journalist, has a Ph.D. in American literature and culture. She writes feature stories for the New York Times, Christian Science Monitor, and Art in America magazine. Her many books on art, architecture, and literature include the best-selling survey of art history, The Annotated Mona Lisa (now in its 3 rd edition) and The Annotated Arch, a history of architecture.

More than a compelling story about a remarkably strong but flawed woman, conveyed in gripping, literary prose, the novel pictures an empire at a crucial turning point, one that saw the birth of our modern Western world.

The Eagle and the Swan (Paperback)