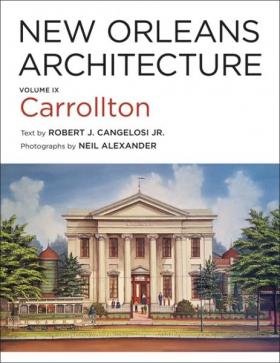 Join us for a virtual event with Robert J. Cangelosi Jr. presenting CARROLLTON, the recently released 9th volume of the Friends of the Cabildo NEW ORLEANS ARCHITECTURE collection. He will be in conversation with Sandy Baptie. An essential reference guide to one of New Orleans’s most iconic Uptown neighborhoods, New Orleans Architecture: Carrollton documents the remarkable architectural history of the former city of Carrollton, once the seat of Jefferson Parish and now listed on the National Register of Historic Places.

To participate in the event register here.

Following the format of previous volumes in the series, Robert J. Cangelosi Jr. divides the study into three sections. He begins in the early eighteenth century by chronicling the area’s development as one of the many upriver communities just west of New Orleans. Its fields and plantations afforded early homesteaders tillable farmland and easy access to the Mississippi River. Later, during the War of 1812, American troops led by William Carroll encamped there, and the area was subsequently named for the general. In 1831, developers purchased the land, subdivided it, and began construction of a road and a canal linking the area to New Orleans. Local officials reorganized Carrollton in 1845—by then a village of about 1,000 residents—as a town in Jefferson Parish, and in 1859 a charter officially incorporated it as a city. Just fifteen years later, the City of New Orleans annexed Carrollton—now replete with schools, public gardens, and brick-paved streets—as the Seventh Municipal District.

The volume’s second section consists of a “Building Index,” which gives the original owners, dates of construction, costs, designers, and builders for many of the structures erected in Carrollton since its founding. In the “Selective Architectural Inventory,” the book’s final section, Cangelosi explores the history of nearly 420 historic homes and buildings in Carrollton, and shares thumbnail photographs, detailed sales records, and information on a variety of architectural styles. 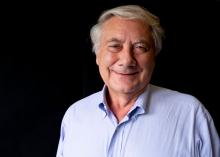 Robert J. Cangelosi Jr. is president and partner at Koch and Wilson Architects. He is the co editor of two other books in the New Orleans Architecture series, Volume VII: Jefferson City and Volume VIII: University Section.  For over thirty-five years, his practice has focused on the preservation, restoration, renovation, and adaptive reuse of hundreds of historic structures in Louisiana and Mississippi, as well as archival research reports and architectural assessment studies. A former president and current board member of Friends of the Cabildo, Cangelosi has served as a historical advisor and appeared in programs for Home & Garden Television and WYES-TV New Orleans. Robby has taught New Orleans Architecture at Tulane University for over two decades and is an instructor for Design Art seminars throughout the country. He holds a Master of Architecture degree from the University of Florida. 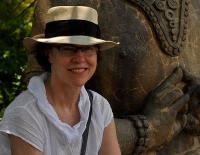 Sandy Baptie has been practicing architecture for 30 years including 18 as Managing Principal with ENVISION Architects. Her practice has focused on institutional and community projects, with a focus on green building and sustainable site design. Her recent projects include the new Honest Weight Food Coop, Five Rivers Environmental Education Center, and Capital District Community Gardens Urban Grow Center. Sandy is a licensed tour guide and a board member of Friends of the Cabildo. She also gives monthly tours on multiple neighborhoods for the Friends and most recently designed a Carrollton Tour for the Friends.

An essential reference guide to one of New Orleans's most iconic Uptown neighborhoods, New Orleans Architecture: Volume IX documents the remarkable architectural history of the former city of Carrollton, once the seat of Jefferson Parish and now listed on the National Register of Historic Places.