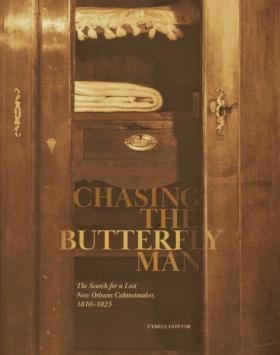 Please join us for a presentation and signing celebrating the launch of Cybèle Gontar’s new book, CHASING THE BUTTERFLY MAN OF NEW ORLEANS: The Search for a Lost New Orleans, 1810-1825, inspired by the tenth anniversary of the landmark publication, FURNISHING LOUISIANA: Creole and Acadian Furniture, 1735-1835. She will appear in conversation with expert furniture restorer Steve Huber.

During the twentieth century, furniture collectors and scholars in New Orleans identified a small group of armoires and named their anonymous craftsman the “Butterfly Man” for his repetitive use of a commonplace butterfly-shaped joint used to reinforce panels.

Today, seventeen Butterfly Man armoires (ca. 1810– 1825) are documented as having been made in the same New Orleans workshop. While their maker’s identity remains a mystery, his cabinets represent the zenith of craftsmanship in early nineteenth-century Louisiana. In order to contextualize the Butterfly Man’s story, this study explores the history and use of the armoire in Europe and Louisiana and considers early nineteenth-century cabinetmaking in New Orleans. Who were the early cabinetmakers and where were they from? What was their place in the social fabric of New Orleans? What were the Butterfly Man’s influences and how do his armoires reflect them? Who might the Butterfly Man have been?

CHASING THE BUTTERFLY MAN OF NEW ORLEANS, written by New Orleans art historian Cybèle Gontar and published by the Louisiana Museum Foundation, is the first comprehensive exploration of this New Orleans cabinetmaker, his construction methods, and the ongoing search for his identity.

Cybèle Gontar is the author of Salazar: Portraits of Influence in Spanish New Orleans, 1785–1802 (University of New Orleans Press / Ogden Museum of Southern Art, 2018) and Furnishing Louisiana: Creole and Acadian Furniture, 1735–1835 (Historic New Orleans Collection, 2010). She is a doctoral candidate in American art at The Graduate Center of the City University of New York and former Pre-doctoral Fellow of the National Portrait Gallery, Smithsonian Institution (2014–2015).

To request a signed copy, write "Signed Copy" in the comment box during checkoiut.