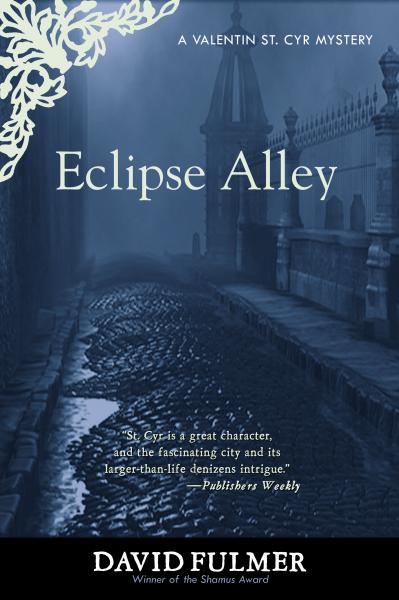 In the darkness of a May night in 1916, two “sporting girls” walking home through New Orleans’ Storyville district come upon a body that’s been hideously ravaged. And so begins Eclipse Alley. Valentin, the Creole detective who has spent the previous ten years working the scarlet streets, is drawn into a maze of lies, corruption, and madness, as dark a labyrinth as he navigated in the previous five award-winning and critically-acclaimed mysteries.

The sense of place is so palpable you can almost hear the music. Fulmer’s writing is crisp and nuanced. Valentin is a hero for whom it’s easy to cheer.” — The Detroit Free Press

“St. Cyr is a great character, and the fascinating city and its larger-than-life denizens intrigue.” — Publishers Weekly 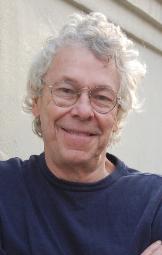 David Fulmer is the author of eleven critically-acclaimed and award-winning novels. Chasing the Devil's Tail was nominated for a Los Angeles Times Book Prize, a Barry Award, and a Falcon Award, was on Borders' "Best of 2003 List," and won the 2002 Shamus Award. Jass was nominated for the "Best of 2005" lists by Library Journal, Deadly Pleasures Magazine, and The St. Louis Post-Dispatch. Rampart Street was rated New York Magazine's "Best Novels You've Never Read" and the audiobook won a Benjamin Franklin Award. The Dying Crapshooter's Blues received the BookPage "Ice Pick of the Month Award" among other plaudits and The Blue Door was nominated for the Shamus Award for Best Novel. Lost River was published in 2009 and The Fall was released by Five Stones Press in 2011. The Night Before, an adult holiday novella, was published as a Bang Bang Lulu Edition in November of 2012, followed by the historical Will You Meet Me in Heaven? in 2014 and The Iron Angel, the fifth novel in the acclaimed Storyville series, in March of 2015. His books have received superlative reviews from The Times Picayune, The New York Times, Publishers Weekly, The San Francisco Chronicle, The Washington Post, The St. Louis Post-Dispatch, BookList, Kirkus Reviews, The Baltimore Sun, Mystery Review, The Detroit News, The Telegraph (UK), The Plain Dealer, Crime Spree Magazine, The Boston Globe, Crimetime UK, The Tennessean, Library Journal, Jazz Review, The Christian Science Monitor, and numerous other publications and book websites. His novels have been released in audiobook and have been translated into Italian, French, Japanese, and Turkish. A native of central Pennsylvania, David Fulmer lives in Atlanta with his wife Sansanee Sermprungsuk.

In the red-light district New Orleans, players of the new music they call "jass" have been turning up dead. To Storyville detective Valentin St. Cyr, it's no surprise. These characters, mostly lowdown "rounders," walk on the wild side, working their rowdy music through the night and spending their days in excess that sets the tone for a hundred years of American musical mayhem to follow.

As the third Storyville mystery begins, Creole detective Valentin St. Cyr has just returned to New Orleans. Having only recently solved the case of the jass murders, he is drawn reluctantly into the investigation of a new murder--that of a well-to-do gentleman on seedy Rampart Street.

No one cares much when a couple of street whores working the lowest rung on the prostitution ladder in 1914 New Orleans are murdered in the same fashion. But when a third sporting woman turns up dead in a crib, a small panic ensues, and Tom Anderson, now beginning his third decade as the King of Storyville, sends word from his hospital bed to Creole detective Valentin St. Cyr.

Autumn 1913. Valentin St. Cyr has been absent from his Storyville stomping grounds for some months, trying to make it in the straight detective world and make a go of it with his longtime love, Justine. But then a man is found dead in a district brothel. The madam immediately turns to the Creole detective for help.