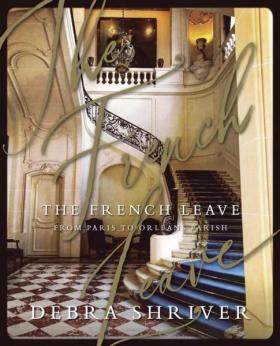 Come meet Debra Shriver when she visit  to signs her beautiful new book, THE FRENCH LEAVE: From Paris to Orleans Parish.

THE FRENCH LEAVE: From Paris to Orleans Parish by Debra Shriver

Debra Shriver has been a journalist, copywriter, publicist, media executive, book author, documentary film producer and, most recently, photographer. Her lifelong fascination has been juxtaposing words and pictures, and now she focuses her lens on the singular image. With THE FRENCH LEAVE, she goes with what she knows: a Francophile's view of Paris, but also, with sleight of hand, her adopted hometown of New Orleans as it cameos its way through Paris.

Recently, she spent nine months in Paris as a flaneuse -- the keen-eyed observer, the walker who is there to discover, the non-tourist in situ. THE FRENCH LEAVE:From Paris to Orleans Parish is her third book on the Crescent City, and her first as photographer and publisher with her new imprint, Crescent City Press. The book explores the silent corners, secret gardens and privates spaces of Paris and its surroundings in small detail. There are diptychs, collages and a "window" series looking into venues ranging from the Musee Rodin, to the restaurant Chez l'Ami Louis and the kitchen at Claude Monet's former home in Giverny. Shriver also gained access to the Hotel de Pontalba, a hotel particular and the Parisian home of New Orleans' Micaela Almonester, Baroness de Pontalba, who build iconic Jackson Square in the heart of the Vieux Carre. Hotel de Pontalba is now the residence of the U.S. Ambassador to France. Shriver also explores the private apartment of Coco Chanel, meets Catherine Deneuve, visits the Parisian restaurant Allard and the Hotel La Mirande in Avignot and follows in the footprint of Colette, Ernest Hemingway and Henry Miller.

She has playfully substituted a few New Orleans images as stand-ins for Paris, subtly connecting the two cities. "New Orleans is the daughter Paris, and a doppelganger of sorts," Shriver says. There is a bit of interplay between the two, with deptychs pairing "like" subjects from both cities.

Shriver brings a modern sensibility to these photographic works, which she shot and edited exclusively with an iPhone Lens. The accompanying text chronicles her departure from New York City, her time in Paris, and her move to New Orleans.