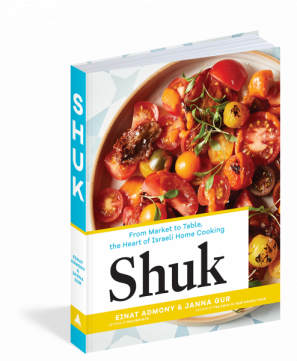 Join us at the JCC for a special evening with Einat Admony featuring her new book SHUK: From Market to Table, the Heart of Israeli Home Cooking, which has been named a Best New Cookbook for Fall 2019 by Publishers Weekly, Epicurious and Robb Report. She will appear in conversation with chef Alon Shaya.

Israeli food has become the it cuisine, with Israeli restaurants opening throughout the country. But what makes Israeli food so special? Israel is a culinary crossroads, a mishmash of foods best represented in its shuks, or markets, where foods from Yemen, Morocco, Bulgaria, Libya, Turkey, Russia, the Levant, and many other regions sit side by side to create a food culture unlike anywhere else in the world.

With Shuk, home cooks everywhere can now inhale the fragrances and taste the flavors of the vivacious culinary mash-up that is today’s Israel. The book takes you deeper into this trending cuisine, through the combined expertise of the authors, chef Einat Admony of Balaboosta and food writer Janna Gur. Admony’s long-simmered stews, herb-dominant rice pilafs, toasted-nut-studded grain salads, and of course loads of vegetable dishes—from snappy, fresh, and raw to roasted every way you can think of—will open your eyes and your palate to the complex nuances of Jewish food and culture. The book also includes authoritative primers on the well-loved pillars of the cuisine, including chopped salad, hummus, tabboulehs, rich and inventive shakshukas, and even hand-rolled couscous with festive partners such as tangy quick pickles, rich pepper compotes, and deeply flavored condiments. Through gorgeous photo essays of nine celebrated shuks, you’ll feel the vibrancy and centrality of the local markets, which are so much more than simply shopping venues—they’re the beating heart of the country. With more than 140 recipes, Shuk presents Jewish dishes with roots in Persia, Yemen, Libya, the Balkans, the Levant, and all the regions that contribute to the evolving food scene in Israel. The ingredients are familiar, but the combinations and techniques are surprising. With Shuk in your kitchen, you’ll soon be cooking with the warmth and passion of an Israeli, creating the treasures of this multicultural table in your own home. 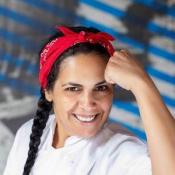 Einat Admony is the author of Balaboosta and chef/owner of New York City's popular Balaboosta, Kish-Kash, and Taïm restaurants, which have been featured in The New Yorker, the New York Times, and New York magazine, among many other newspapers, magazines, and websites. When Admony is not at her restaurants, she can be found at her home in Brooklyn, cooking for the crowd of family and friends who regularly gather around her dining table. 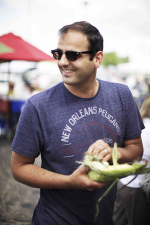 Alon Shaya was born in Israel, raised in Philadelphia, and calls New Orleans his home. He has been nominated for five James Beard Awards.  He is the author of a cookbook, Shaya: An Odyssey of Food, My Journey Back to Israel. He recently opened two new restaurants: Saba in New Orleans and Safta in Denver.

Octavia Books wiill have books available for purchase at the event at the JCC. You may pre-order books below whether you are attending or not. If you are attending and wish to pick up your books at the event, check the "pickup at store option" during checkout and then write "pickup at event" in the comment box. If you are not attending, you may include instructions regarding whom you would like books inscribed. We will give a portion of sales to the JCC to help support more events.

Shuk: From Market to Table, the Heart of Israeli Home Cooking (Hardcover)

“If your knowledge of Israeli cooking starts and ends with Ottolenghi, we have a new book for you. Shuk . . . provides both approachable recipes and an education in Israeli eating. The detailed instructions on the building blocks of Israeli cusine, like a six panel labneh photo series, will comfort even the most timid of cooks, while the border-crossing dishes—like a fragrant Ethiopian Doro Wot—provide insight into what a modern day Israelite eats. If you're visiting Tel Aviv any time soon or just dreaming of it, this book doubles as travel inspiration: Lush photo essays from a handful of choice outdoor markets, or shuks, appear between recipes.”
—Epicurious

Shaya: An Odyssey of Food, My Journey Back to Israel: A Cookbook (Hardcover)

An exciting debut cookbook that confirms the arrival of a new guru chef . . . A moving, deeply personal journey of survival and discovery that tells of the evolution of a cuisine and of the transformative power and magic of food and cooking.