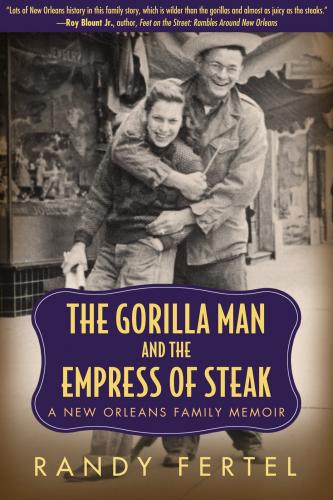 "Lots of New Orleans history in this family story, which is wilder than the gorillas and almost as juicy as the steaks."
- Roy Bount, Jr.

Please join us for a reading and booksigning with Randy Fertel featuring THE GORILLA MAN AND THE EMPRESS OF STEAK: A New Orleans Family Memoir, a poignant and bittersweet portrait of one of New Orleans’ most legendary families, as well as the famous Ruth's Chris Steak House.

A masterful storyteller, Fertel weaves the larger-than-life stories of his parents – Ruth, founder of Ruth’s Chris, and Rodney, known as “The Gorilla Man” for his quixotic 1969 run for mayor – with the sights, sounds, and tastes of New Orleans.

Rodney became known as the “Gorilla Man” when he ran for mayor of New Orleans on a single campaign promise—buying a pair of gorillas for the zoo. He managed a paltry 308 votes but he purchased the gorillas anyway.

Readers get a behind-the-scenes look at the famous Ruth’s Chris Steak House, where Randy first served as busboy, and later as Director of Marketing – until the day he sued the company, and by proxy, his mother. There from the beginning, Fertel takes us to the day Ruth mortgaged her house, to the liquor-fueled board meetings and multi-million dollar lawsuits that followed.

With an insider’s perspective, he recalls the glory days of the flagship, when the regulars included everyone from Governor Edwin Edwards to Fats Domino, to the company’s meteoric expansion into seven countries. We learn how a local steak house became an empire, as well as the origins of their famous creamed spinach (a family recipe).

Woven into this entrepreneurial story is the Empress herself who, despite her lack of foresight and penchant for gambling, leveraged her commanding presence and sheer guts to build the largest fine-dining chain in the country. Ruth’s undeniable charisma leaps off the page to charm us, yet we also come to see her pitfalls – her fierce competitiveness, limited emotional range, and tendency to invite questionable partners into her inner circle, despite objections from her own family. The book presents a portrait of Ruth the world has not yet seen – Ruth, not as the infallible Empress of Steak, but as a human, in all her glory and flaws.

But more than a biography of two colorful characters, THE GORILLA MAN AND THE EMPRESS OF STEAK is also a memoir of New Orleans – a tapestry of the language, people, food and places.

Randy Fertel, a writer based in New York and New Orleans, is president of both the Fertel Foundation and the Ruth U. Fertel Foundation. He has taught English at Harvard, Tulane, LeMoyne College, the University of New Orleans and the New School for Visual Arts. He holds a PhD from Harvard where he received a teaching award by student vote. He specializes in the literature of the Vietnam War. A former manager of Ruth's Chris Steak House in New Orleans, he remembers interrupting high school homework to make emergency bread runs. He also served as Director of Marketing for the national corporation. A lover of fine wines, fine food, and great cars, he has long dined out on the stories that make up "THE GORILLA MAN AND THE EMPRESS OF STEAK."