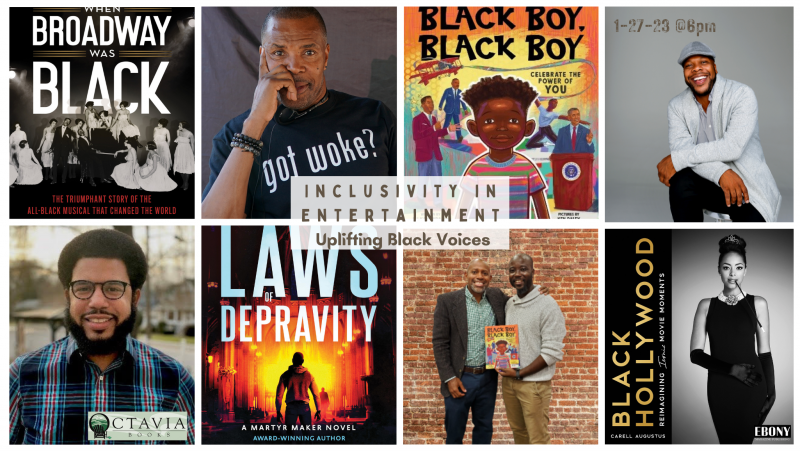 What do an actor, a celebrity photographer, an assistant district attorney and juvenile prosecutor, and a filmmaker have in common?

On the surface, they are all Black creatives with forthcoming books from Sourcebooks. But in diving deeper, they are all intimately familiar with Black representation (or lack thereof) in the entertainment industry as a whole and the damage that can do to people in the Black community, and most importantly, they have all chosen to be the change they wish to see by telling stories that have been historically excluded. In this special, up-front, lively, in-person conversation moderated by pop culture expert / librarian / author Caseen Gaines, four trailblazing professionals will present their new titles and will then discuss the creation of Black-centered content, the increasing the availability of diverse stories, and what representation of identities means across genres in book publishing.

Moderator CASEEN GAINES is an author and journalist who has written for Rolling Stone, Vanity Fair, and NY Mag. He holds an MA from Rutgers Uni in American Studies, focusing on racial representations in popular culture.

ERIQ LA SALLE is an actor, director, producer, and author best known to worldwide television audiences for his portrayal of the commanding Dr. Peter Benton in the award-winning, critically acclaimed medical drama, E.R. He was raised in Hartford, Connecticut, and educated at Juilliard and NYU’s Tisch School of the Arts.

CARELL AUGUSTUS is a Los Angeles-based photographer whose career has taken him around the world to shoot some of the biggest stars on the planet. His celebrity clients have included Viola Davis, Beverly Johnson, Mariah Carey, Elizabeth Banks, Pierce Bronson, Meghan Markle, Serena Williams, Snoop Dogg, and more.

ALI BIKO SULAIMAN KAMANDA is an award-winning filmmaker and social entrepreneur from Sierra Leone, West Africa. He runs BIKO Studios, a cross-cultural film production company and is the President of Salone Rising, a not-for-profit organization that provides micro-financing and mentoring resources to small business owners in rural Sierra Leone.

JORGE REDMOND currently works in the Buncombe County District Attorney's office as an Assistant District Attorney, and as an adjunct professor in South College's Legal Department. Ali and Jorge are college friends, and Black Boy, Black Boy is their debut book.

When Broadway Was Black: The Triumphant Story of the All-Black Musical that Changed the World (Paperback)

For readers of Hidden Figures and Something Wonderful comes the story of how Sissle and Blake, along with comedians Flournoy Miller and Aubrey Lyles, overcame poverty, racism, and violence to harness the energy of the Harlem Renaissance and produce a runaway Broadway hit that launched the careers of many of the twentieth century's most beloved Black performers. Born in the shadow of slavery and establishing their careers at a time of increasing demands for racial justice and representation for people of color, they broke down innumerable barriers between Black and white communities at a crucial point in our history.

A revolutionary re-imagining of what Hollywood could have looked like if Black actors had been cast in the iconic roles that define so much of film history, created by visionary photographer Carell Augustus.

A revolutionary re-imagining of what Hollywood could have looked like if Black actors had been cast in the iconic roles that define so much of film history, created by visionary photographer Carell Augustus.

For fans of Thomas Harris and Louise Penny comes a dark and gritty crime thriller from award-winning actor, producer, and director Eriq La Salle, following two NYPD detectives and an FBI agent as they hunt a serial killer who butchers 12 clergymen every ten years, shedding light on the transgressions of some of the most trusted members of society and raising eye-opening spiritual questions around the blurred lines between good and evil.