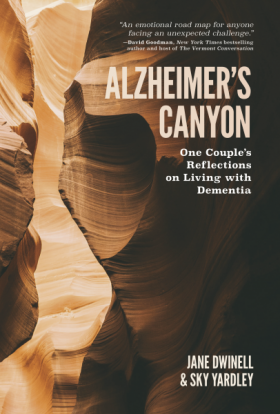 Please join us for a Sunday afternoon (after game) booksigning and presentation with Jane Dwinell featuring her new book, ALZHEIMER'S CANYON: One Couple's Reflections on Living with Dementia.

“This exquisite and intimate book is like a love letter from an unknown address. Jane Dwinell and Sky Yardley take us on a journey with them into the uncharted world of Alzheimer's Disease. They bravely navigate the depths of Alzheimer's Canyon, shining a light in a disorienting landscape. Their unflinching honesty about their lived experience serves as an emotional road map for anyone facing an unexpected challenge. Out of her grief, Dwinell offers this gift, and hope.” —David Goodman, New York Times bestselling author

Jane and her husband, Sky Yardley, lived in New Orleans and built an unusual house along Bayou St John. Sky, in particular, was active with rebuilding efforts after Katrina, and with volunteering with the Court Watch program in the courts. After Sky was diagnosed with dementia, the two created a blog reflecting on their journey. Jane formed their writings into a book following Sky's death in 2021. 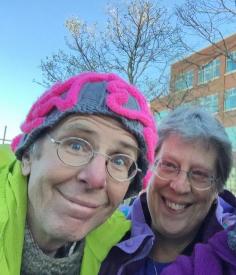 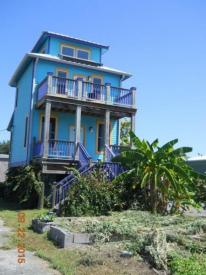 Sky Yardley & Jane Dwinell were together for 36 years. They raised two children, for many years had a small farm, and retired in their fifties to travel and do volunteer work. They both had successful careers—Sky as a family mediator, and Jane as an RN, freelance writer, and Unitarian Universalist minister. In 1992, Jane authored Birth Stories: Mystery, Power and Creation. As an avocation together they designed and built seven houses and renovated two others. Sky was diagnosed with “probable early stage Alzheimer’s disease” in the summer of 2016. He had been showing signs of memory loss since 2012, most significantly since 2015. He was 66 when he was diagnosed. Jane was 62. Sky died in 2021, after chronicling with Jane his five-year decline from this fatal disease, the sixth-leading cause of death in the US.

Alzheimer's Canyon: One Couple's Reflections on Living with Dementia (Paperback)

In the middle of the night I wake up and don't know where I am . . . . Am I in my house? My neighbor's house? Do I turn on the light? Do I get dressed? I turn to Jane, hold her hand, and let her bring me back to reality.

What do you do when your reality slips away? If you're Sky Yardley and Jane Dwinell, you accept each new challenge, reshape your life, and write.

When Sky was diagnosed with "probable early stage Alzheimer's" at age 66, he was determined to live as fully with his new reality as possible. He researched dementia, talked about dementia, connected with other people with the disease, and, finally, he wrote about it. With humor and honesty, love and compassion, Sky and his wife Jane describe what it's like to live with a constantly evolving and mysterious new life. "The brain is a mysterious thing," writes Jane, as Sky muses about traveling unmapped roads with no GPS.

Welcome to Alzheimer's Canyon: there is one way in, and no way out. Follow Sky and Jane as they navigate this journey they did not ask to take, a journey that balances pain, loss, and confusion with gratitude, wonder, and transformation.