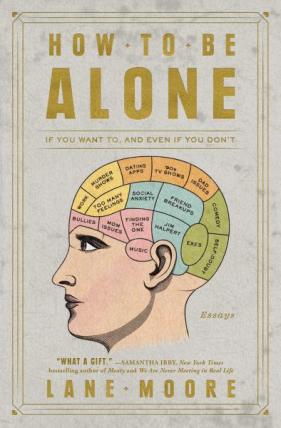 Join us when Lane Moore—former Sex & Relationships Editor for Cosmopolitan and host of the wildly popular comedy show Tinder Live—presents her poignant, funny, and deeply moving first book, HOW TO BE ALONE: If You Want To, and Even If You Don't. Lane will appear in conversation with New Orleans-based writer, performer, and radio enthusiast Aura Bishop.

Lane Moore is a rare performer who is as impressive onstage. But her story has had its obstacles, including being her own parent, living in her car as a teenager, and moving to New York City to pursue her dreams. Through it all, she looked to movies, TV, and music as the family and support systems she never had.

From spending the holidays alone to having better “stranger luck” than with those closest to her to feeling like the last hopeless romantic on earth, Lane reveals her powerful and entertaining journey in all its candor, anxiety, and ultimate acceptance—with humor always her bolstering force and greatest gift.

HOW TO BE ALONE is a must-read for anyone whose childhood still feels unresolved, who spends more time pretending to have friends online than feeling close to anyone in real life, who tries to have genuine, deep conversations in a roomful of people who would rather you not. Above all, it’s a book for anyone who desperately wants to feel less alone and a little more connected through reading her words. 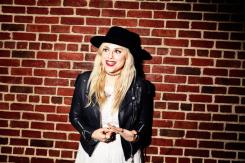 Lane Moore is an award-winning comedian, writer, actor, and musician. The New York Times called her comedy show Tinder Live “ingenious.” Her comedy and her band, It Was Romance, have been praised everywhere from Pitchfork to Vogue, and her writing has appeared everywhere from The New Yorker to The Onion. She is the former sex and relationships editor at Cosmopolitan, where she received a GLAAD Award for her groundbreaking work expanding the magazine’s queer coverage. She lives in Brooklyn with her dog-child, Lights.

Aura Bishop was the creator and host of Backstage on the Bayou, the first independent arts and entertainment podcast in New Orleans, the founder of the former podcast collective NOLA New Media, and creator of The Sticky. In New York, she volunteered with Clocktower Radio, assisting with social media and event support. Her work has appeared in Slow Southern Style, NOLA Defender, Space Nation Orbit, Stigma Fighters, and soon, Cinnamon Mag.

How to Be Alone: If You Want To, and Even If You Don't (Paperback)

“How to Be Alone feels like peeling back your best friend’s skull and jumping into her brain. Lane is so open and funny and honest; I never want to be alone if it means I can’t have her with me. What a gift.” — Samantha Irby, New York Times bestselling author of Meaty and We Are Never Meeting in Real Life

“How to Be Alone is like a song that pops up on the radio and lifts your spirits . . . so special, elegant, and true. It’s spectacular and truly personal. This book is with me every day, and it helps so much.”— Caroline Kepnes, author of You, Hidden Bodies, and Providence