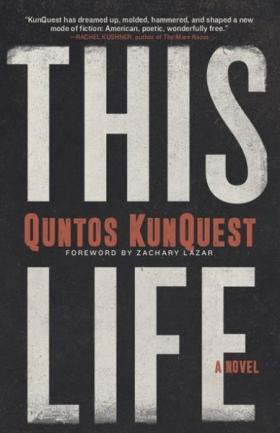 Please join us via Zoom for the launch of Quntos KunQuest's THIS LIFE: A Novel. The program will include author Zachary Lazar who wrote the book's Foreword and actress Taece DeFillo who will perform a reading from the book and appear in conversation.  KunQuest will not be allowed to participate directly in the program as he remains incarcerated at Angola.

To participate, you must register now.

This debut novel marks the appearance of a bold, distinctive new voice in American fiction that delves into the meaning of a life spend behind bars, the human bonds formed therin, and the poetry that can emerge even in the most dire circumstances

Lil Chris is just nineteen when he arrives at Angola as an AU—an admitting unit, a fresh fish, a new vict. He’s got a life sentence with no chance of parole, but he’s also got a clear mind and sharp awareness—one that picks up quickly on the details of the system, his fellow inmates, and what he can do to claim a place at the top. When he meets Rise, a mature inmate who's already spent years in the system, and whose composure and raised consciousness command the respect of the other prisoners, Lil Chris learns to find his way in a system bent on repressing every means he has to express himself.

Lil Chris and Rise channel their questions, frustrations, and pain into rap, and This Life flows with the same cadence that powers their charged verses. It pulses with the heat of impassioned inmates, the oppressive daily routines of the prison yard, and the rap contests that bring the men of the prison together.

This Life is told in a voice that only a man who’s lived it could have—a clipped, urgent, evocative voice that surges with anger, honesty, playfulness, and a deep sense of ugly history. Angola started out as a plantation—and as This Life makes clear, black inmates are still in a kind of enslavement there. This Life is an important debut that commands our attention with the vigor, dynamism, and raw, consciousness-expanding energy of this essential new voice.

“Quntos has been incarcerated since he was nineteen for a $300 dollar carjacking in which no one was physically injured. He is serving a life sentence for this one act.This Life is a vivid portrayal of what the severity of a life sentence means, but that’s not the reason you should read it. The title explains why you should read it. It is for the clarity and insight and enormous dignity with which Quntos KunQuest conjures the singular human lives in his story.” Zachary Lazar, from the foreword for This Life.

“What a gripping, evocative novel This Life is. Quntos KunQuest has given us an intimate, human, insightful tale that calls for action even as it claims self-acceptance. It’s one hell of a debut." Jami Attenberg, author of All This Could Be Yours

"This brilliant novel comes to us written in the secret and perfect language of those who are left behind walls to evolve from a very young age: brotherly love is the code, self-realization is the goal, unending hope is the sorrow. I love this book so much. I can't imagine why it has taken so long for the true genre of prison writing to arrive."  Deb Olin Unferth, author of Barn 8

“This Life is jolty, rhythmic, sometimes very funny, sermonizing and chopped: it is also beautiful. Quntos KunQuest has dreamed up, and molded, hammered, and shaped, a new mode of fiction: American, and poetic, and wonderfully free.” Rachel Kushner, author of TheFlamethrowers

"Quntos KunQuest is such an original voice. His spirited prose and evocative storytelling will both knock you off balance and pull you in. In the end This Life is about what it means to be human in the most inhumane of places.” Alex Kotlowitz, author of An American Summer and There Are No Children Here

Quntos KunQuest was born in Shreveport, Louisiana in 1976. Since 1996, he has been incarcerated at the Louisiana State Prison in Angola, Louisiana. He is a musician, rapper, visual artist, and novelist.

Zachary Lazar is the author of six books, including Vengeance. He is a professor of English at Tulane University in New Orleans.

This Life is the debut novel by Quntos KunQuest, a longtime inmate at Angola, the infamous Louisiana State Penitentiary. This marks the appearance of a bold, distinctive new voice, one deeply inflected by hiphop, that delves into the meaning of a life spent behind bars, the human bonds formed therein, and the poetry that even those in the most dire places can create.