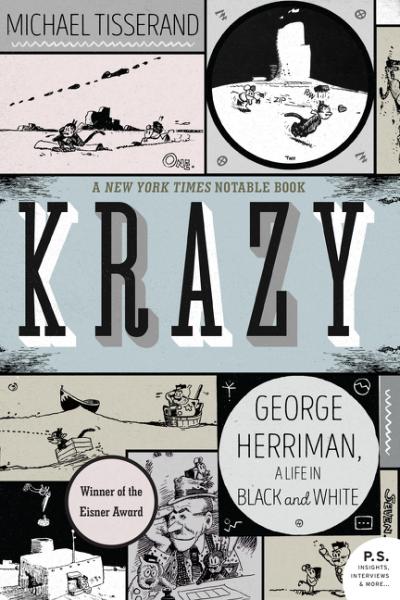 Join Eisner Award-winning author Michael Tisserand, Panorama Brass Band, and Octavia Books in celebrating the publication of the paperback edition of KRAZY: GEORGE HERRIMAN, A LIFE IN BLACK AND WHITE!

Panorama will be playing and Octavia Books will be on hand selling copies of the new KRAZY paperback - featuring additional writing by Chris Ware and Gabrielle Bellot, and an interview with Michael Tisserand.

The party is taking place at Treme Coffeehouse, 1501 St Philip Street -- just down the street from George Herriman's birthplace.

Free and open to all!

And, this just in: John Boutté is graciously showing up to perform the first-ever live performance of "Happy Land!"

The riveting biography of Krazy Kat creator George Herriman that explores the turbulent time and place from which he emerged—and the deep secret he explored through his art.

A visionary strip. Who drew it, and where from? Tisserand’s robust research illuminates, without diminishing, the mystery.”—Roy Blount Jr.

In this epic and revelatory biography of Krazy Kat creator George Herriman, the man behind one of the greatest comic strips in history finally gets his due. Michael Tisserand celebrates Herriman’s wondrous comics while delving deep into the life of a cartoonist on America’s color line.

A native of nineteenth-century New Orleans, George Herriman came of age as a cartoonist in the boomtown of Los Angeles and the wild metropolis of New York. Appearing in the biggest newspapers of the early twentieth century—including those owned by William Randolph Hearst—Herriman’s Krazy Kat cartoons quickly propelled him to fame. Although it would prove fitfully popular with readers of the period, his work has been widely credited with elevating cartoons from daily amusements to anarchic art. For this reason, cartoonists from Charles M. Schulz to Bill Watterson have named him as a primary influence.

Herriman used his work to explore the human condition, creating a modernist fantasia that was inspired by the landscapes he discovered in his travels—from the slapstick movie lots of young Hollywood to the Beckett-like desert vistas of the Southwest. Yet underlying his own life—and often emerging from the contours of his very public art-was a very private secret: known as “the Greek” for his swarthy complexion and curly hair, Herriman was actually African American, born to a prominent Creole family that hid its racial identity in the dangerous days of Reconstruction.

Michael Tisserand is the author of The Kingdom of Zydeco, which won the ASCAP-Deems Taylor Award for music writing, and the Hurricane Katrina memoir Sugarcane Academy. He served as editor of Gambit Weekly, New Orleans’ alternative newsweekly. He lives in New Orleans, Louisiana.

Krazy: George Herriman, a Life in Black and White (Paperback)

If you wish to pre-order and have your copy available for pick-up at the launch event, please select "" during checkout and leave a note in the Order Comments box saying "Will pickup at launch event."

If you cannot attend the launch event, we will be happy to ask Michael Tisserand to sign your book, and we will either hold it at the bookstore or ship it to you according to your instructions.