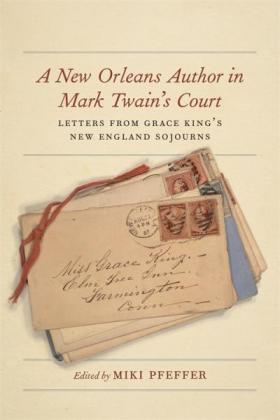 Please join us for for a presentation and signing with Miki Pfefer celebrating the launch of A NEW ORLEANS AUTHOR IN MARK TWAIN'S COURT: Letters from Grace King's New England Sojourns.

Shortly after Grace King wrote her first stories in post-Reconstruction New Orleans, she entered a world of famous figures and literary giants greater than she could ever have imagined. Notable writers and publishers of the Northeast bolstered her career, and she began a decades-long friendship with Mark Twain and his family that was as unlikely as it was remarkable. Beginning in 1887, King paid long visits to the homes of friends and associates in New England and benefited from their extended circles. She interacted with her mentor, Charles Dudley Warner; writers Harriet Beecher Stowe and William Dean Howells; painter Frederic E. Church; suffragist Isabella Beecher Hooker; Chaucer scholar Thomas Lounsbury; impresario Augustin Daly; actor Will Gillette;cleric Joseph Twichell; and other stars of the era.

As compelling as a novel, this audacious story of King’s northern ties unfolds in eloquent letters. They hint at the fictional themes that would end up in her own art; they trace her development from literary novice to sophisticated businesswoman who leverages her own independence and success. Through excerpts from scores of new transcriptions, as well as contextualizing narrative and annotations, Miki Pfeffer weaves a cultural tapestry that includes King’s volatile southern family as it struggles to reclaim antebellum status and a Gilded Age northern community that ignores inevitable change.

King’s correspondence with the Clemens family reveals incomparable affection. As a regular guest in their household, she quickly distinguished “Mark,” the rowdy public persona, from “Mr. Clemens,” the loving husband of Livy and father of Susy, Clara, and Jean, all of whom King came to know intimately. Their unguarded, casual revelations of heartbreaks and joys tell something more than the usual Twain lore, and they bring King into sharper focus. All of their existing letters are gathered here, many published for the first time.

Miki Pfeffer is a visiting scholar at Nicholls State University and the author of the award-winning Southern Ladies and Suffragists: Julia Ward Howe and Women’s Rights at the 1884 New Orleans World’s Fair.

"Miki Pfeffer's recovery of correspondence of Grace King is a remarkable achievement. King was an important, though by now a somewhat overlooked, southern writer. Her letters afford us insight into her complex life, a life that transcended the boundaries of region and the gender norms of her time. The correspondence and the informative context that Pfeffer provides give evidence of King's distinctive voice and her complicated personal and social history. Illuminating details about her close relationships with Mark Twain, his wife Olivia Langdon, and their circle are both historically edifying and very satisfying reading. Historians, literary scholars, and engaged readers will be amply rewarded by this fine collection." -Larry Howe, president, Mark Twain Circle of America