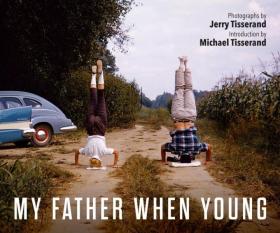 Join us at Octavia Books for the launch of Eisner Award-winning author Michael Tisserand's MY FATHER WHEN YOUNG: Photographs by Jerry Tisserand, published just in time for Father's Day 2021. Michael will appear in conversation with journalist Gwen Thompkins, host of Music Inside Out and former NPR foreign correspondent covering East Africa.

This will be an in-store event. To reserve your participation, please pre-purchase your copy of the book now at octaviabooks.com/product/my-father-when-young-tisserand while using the comment box during checkout to write "attending event."

Special thanks to Chef Frank Brigtsen for catering the event with pimiento cheese finger sandwiches and "chewy-gooey" brownies.

For those not yet vaccinated or who are otherwise unable to attend in-store, we will offer streaming of the program via Facebook Live.

In the late 1950s, Jerry Tisserand roamed from Barcelona to Paris to Kentucky to New Orleans, keeping his camera close at hand. With the goal of taking photographs that “no one else has taken,” Tisserand captured, over a four-year period, a series of unique and vibrant scenes of everyday life: ancient cobblestone vistas, hidden backcountry roads, classic cars, young love, and brilliant revelers at Mardi Gras.

Then one day, he stopped as abruptly as he started. He put away both his camera and his photographs, never to return to them.

Sixty years later, his son, Michael Tisserand, keeping close to home due to COVID, began pulling out dusty boxes of forgotten family mementos. Inside one box, he found two grey steel cases, each containing tidy rows of Kodachrome slides. He pulled a few at random and held them, one at a time, to the light.

At first, he didn’t understand what he was seeing.  Here was the work of a photographer with a curious eye and a unique perspective. An artist.

Then he realized the photos had been taken by someone he never knew—his father when young.

For fans of both photography and Southern culture, MY FATHER WHEN YOUNG is also a book for anyone who has pondered the nagging question: What did my parents’ lives look like before I was born? 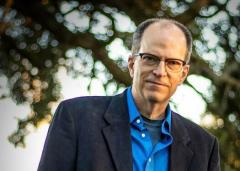 Michael Tisserand is the New Orleans-based of Krazy: George Herriman, a Life in Black and White, the Eisner Award-winning biography of cartoonist George Herriman, creator of Krazy Kat. Other books include The Kingdom of Zydeco and Sugarcane Academy: How a New Orleans Teacher and His Storm-Struck Students Created a School to Remember. Michael’s work has appeared in The New York Times, the Oxford American, the Nation, Daily Beast and Lit Hub. Michael is former editor of Gambit Weekly, and his eleven-part Hurricane Katrina series Submerged was published by alternative newsweeklies across the country. He can be seen in the documentaries Dear Mr. Watterson, Zydeco Crossroads, and Zydeco Breakfast. He is also a founding member of the Mardi Gras parading group Laissez Boys Social Aide and Leisure Club. Michael is often found browsing at Octavia Books; and he contributed a piece on Octavia Books for My Bookstore: Writers Celebrate Their Favorite Places to Browse, Read, and Shop.

Gwen Thompkins is a New Orleans native, NPR veteran and host of WWNO's Music Inside Out, where she brings to bear the knowledge and experience she amassed as senior editor of NPR's Weekend Edition, an East Africa correspondent, the holder of Nieman and Watson Fellowships, and as a longtime student of music from around the world. She penned the in-depth introduction to  the Historic New Orleans Collection's reissued and expanded edition of Danny Barker's A LIFE IN JAZZ which she presented at Octavia Books when the book was released. She is also a former Times-Picayune writer and editor.

MY FATHER WHEN YOUNG - Photographs by Jerry Tisserand, Introduction by Michael Tisserand

"I pulled a few slides at random and held them to the light. Then a few more.
At first, I didn't understand what I was seeing.
Then I realized: these were taken by someone i never knew, my father when young.
— from the Introduction by Michael Tisserand