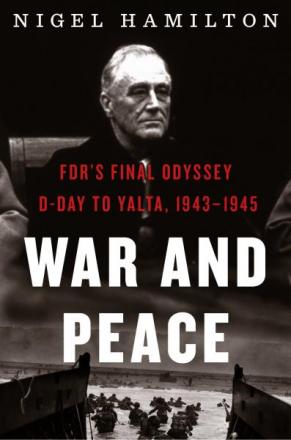 To mark the 75th anniversary of D-day, the stirring climax to Nigel Hamilton’s three-part saga of FDR at war—proof that he was World War II’s key strategist, even on his deathbed.

WAR AND PEACE is the third and final volume of Nigel Hamilton’s epic account of how Franklin Roosevelt won World War II as U.S. Commander in Chief.

His first volume, The Mantle of Command, told the story from defeat at Pearl Harbor to the triumphant U.S. invasion of North Africa in 1942; the book was Longlisted for the National Book Award in 2014. The second volume, Commander in Chief, told the story from the President’s historic trip to Casablanca (setting Unconditional Surrender of the Axis powers as Allied war policy) to the great Allied invasions of Sicily and Italy.

WAR AND PEACE continues the saga of World War II after those invasions. It opens dramatically as FDR travels in the fall of 1943, by sea and air, to Persia – to stop Churchill from sabotaging his plans and timing for D-Day.

This will be Dr. Hamilton’s last big book he undertakes, and has taken a decade to complete. It has been very fulfilling for him to write because he has had a very special connection to the central thread of the trilogy: D-Day. Dr. Hamilton’s father landed on D-Day as a very young British infantry battalion commander; he got to know the commander of the Allied land forces intimately, when he was a student in England, and later wrote his biography in three volumes (the  Monty trilogy), as well as making a major BBC documentary, Monty, In Love and War; and, uniquely, Dr. Hamilton is the last person alive outside the Churchill family to have stayed with Sir Winston and Lady Churchill, at Chartwell, together with Field Marshal Montgomery, who shared with him the story of his relationship with Sir Winston in the lead up to D-Day, and beyond.

This last epic book by Dr. Hamilton is a story every American will be proud of.

WAR AND PEACE will change the way many readers perceive World War II. Using unpublished diaries and interviews,  Dr. Hamilton takes us with the president of the United States as he engages in an historic struggle with his main coalition ally to mount the very invasion Adolf Hitler has told his generals will “decide the war” – but which Churchill is doing his utmost to postpone or cancel. How to persuade the brilliant but misguided British prime minister to back down is a saga that has never been told from FDR’s perspective before—one that called for all the cunning and steeliness the president could command at a crucial moment in hostilities against the Third Reich, as the very prosecution of the war against Hitler hangs in the balance.

The president’s success—especially his triumph in Tehran, where he meets with Stalin for the first time—is matched by a second historic achievement as U.S. Commander in Chief. For the first time, Nigel Hamilton tells the true story of how Roosevelt stunned Churchill and others by appointing not General Marshall, but General Eisenhower to command the D-Day invasion, set for the spring of 1944. This is the climax of the book.

Behind the scenes, however, a tragedy is also taking place—for the once-commanding president is diagnosed not with flu and bronchitis, as his White House doctor maintains, but with fatal heart disease.

WAR AND PEACE thus becomes the most moving volume of Nigel Hamilton’s “FDR at War” trilogy, as the President of the United States and the Commander in Chief of its Armed Forces must decide whether he will run for a fourth term, thereby able to dictate the unconditional surrender of Germany and Japan, or retire before he is felled by heart attack or stroke, like President Wilson.

In watching Roosevelt’s struggle both to win the war and set up the United Nations at Yalta, it is impossible not to admire FDR’s extraordinary courage and visionary efforts on behalf of his country and the free world between 1943 and 1945. 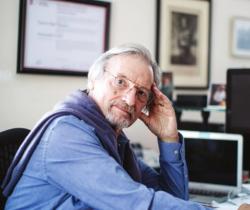 Nigel Hamilton has been studying Churchill and Roosevelt his whole life, and is honored that this book will be shared with the public in time for the 75th anniversary of D-Day, as well as Father’s Day. He is a best-selling and award-winning biographer of President John F. Kennedy, General Bernard “Monty” Montgomery, and President Bill Clinton, among other subjects. He is a senior fellow at the McCormack Graduate School, University of Massachusetts, Boston. He splits his time between Boston and New Orleans.

To mark the 75th Anniversary of D-Day, the stirring climax to Nigel Hamilton’s three-part saga of FDR at war—proof that he was WWII’s key strategist, even on his deathbed.

Longlisted for the National Book Award