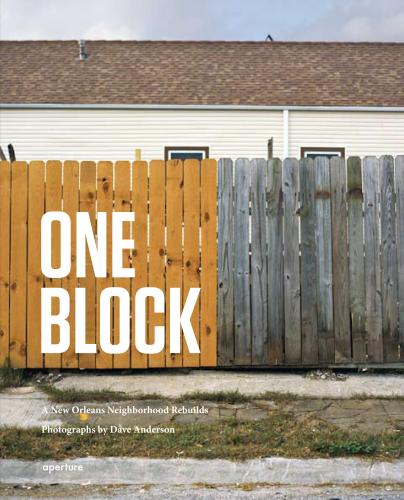 One Block follows the reconstruction of a single New Orleans block from 2006 to 2010 in the wake of Hurricane Katrina, delivering a powerful portrait of the storm's ongoing physical and psychological impact on the city and its residents. Using portraiture, still lifes, and abstract images, Dave Anderson documents the evolution of both the street and its houses as residents rebuild, exploring the very nature of community while testing its resilience. Anderson's work has drawn comparisons to Dorothea Lange and other Farm Security Administration photographers. Seventy years later, between the devastation left by Hurricane Katrina and the current housing crisis, the stability and permanence of the American home are again in question. Yet, One Block reminds us how determination, resilience, and the bonds of community help us to endure.
Click here for a preview some of the images.

Dave Anderson has been recognized as "one of the shooting stars of the American photo scene" by Germany's fotoMAGAZIN and named a "Rising Star" by Photo District News. His project Rough Beauty was the winner of the 2005 National Project Competition awarded by Center, Santa Fe and was published with an essay by Anne Wilkes Tucker. Vince Aletti of the New Yorker has called his work "as clear-eyed and unsentimental as it is soulful and sympathetic." Anderson's work has been featured in magazines from Esquire to Stern and can be found in the collections of prominent museums, including the Museum of Fine Arts, Houston; the Ogden Museum of Southern Art, New Orleans; the Musée de la Photographie, Charleroi; and the Corcoran Gallery of Art, Washington, D.C.

Chris Rose is an acclaimed New Orleans columnist, whose harrowing and poignant essays following Katrina were collected in his widely lauded book 1 Dead in Attic (2005). Called the "Crescent City's Bard" by the Huffington Post, Rose is an essayist for the Newshour with Jim Lehrer, a frequent commentator for National Public Radio's Morning Edition, and a longtime columnist for the Times-Picayune, where he was nominated for a Pulitzer Prize. Rose currently writes for the Gambit weekly newspaper and appears regularly on Fox 8 New Orleans.