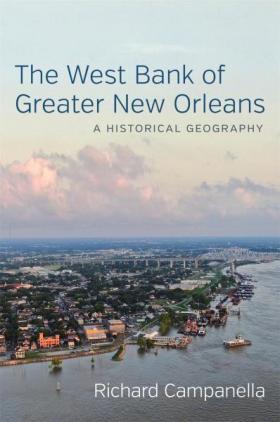 Join Octavia Books and the Preservation Resource Center for a special online event celebrating the release of Richard Campanella’s highly anticipated new book, THE WEST BANK OF GREATER NEW ORLEANS: A Historical Geography. This event will include a live talk by Richard Campanella.

Click here to register in advance for this free Zoom webinar.

Please also show your support by treating yourself to a copy of THE WEST BANK OF NEW ORLEANS (as well as Richard Campanella's other titles) now at octaviabooks.com.

The West Bank has been a vital part of greater New Orleans since the city’s inception, serving as its breadbasket, foundry, shipbuilder, railroad terminal, train manufacturer, and even livestock hub. At one time it was the Gulf South’s St. Louis, boasting a diversified industrial sector as well as a riverine, mercantilist, and agricultural economy. Today the mostly suburban West Bank is proud but not pretentious, pleasant if not prominent, and a distinct, affordable alternative to the more famous neighborhoods of the East Bank.

Richard Campanella is the first to examine the West Bank holistically, as a legitimate subregion with its own story to tell. No other part of greater New Orleans has more diverse yet deeply rooted populations: folks who speak in local accents, who exhibit longstanding cultural traits, and, in some cases, who maintain family ownership of lands held since antebellum times—even as immigrants settle here in growing numbers. Campanella demonstrates that West Bankers have had great agency in their own place­-making, and he challenges the notion that their story is subsidiary to a more important narrative across the river.

THE WEST BANK OF NEW ORLEANS is not a traditional history, nor a cultural history, but rather a historical geography, a spatial explanation of how the West Bank’s landscape formed: its terrain, environment, land use, jurisdictions, waterways, industries, infrastructure, neighborhoods, and settlement patterns, past and present. The book explores the drivers, conditions, and power structures behind those landscape transformations, using custom maps, aerial images, photographic montages, and a detailed historical timeline to help tell that complex geographical story. As Campanella shows, there is no “greater New Orleans” without its cross­-river component. The West Bank is an essential part of this remarkable metropolis. 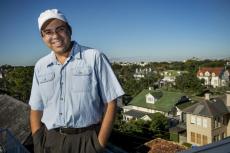 Richard Campanella is a geographer and associate dean for research at the Tulane School of Architecture. Author of eleven books and over two hundred articles, Campanella was named Chevalier dans l’Ordre des Palmes Académiques by the Government of France in 2016. In 2019 he received the Louisiana Writer Award from the Louisiana Center for the Book in the State Library of Louisiana.

The West Bank has been a vital part of greater New Orleans since the city's inception, serving as its breadbasket, foundry, shipbuilder, railroad terminal, train manufacturer, and even livestock hub. At one time it was the Gulf South's St. Louis, boasting a diversified industrial sector as well as a riverine, mercantilist, and agricultural economy.

All New Orleans' glories, tragedies, contributions, and complexities can be traced back to the geographical dilemma Bienville confronted in 1718 when selecting the primary location of New Orleans.

Exploring the Crescent City from the ground up, Richard Campanella takes us on a winding journey toward explaining the city's distinct urbanism and eccentricities.

New Orleans is a city of many storied streets, but only one conjures up as much unbridled passion as it does fervent hatred, simultaneously polarizing the public while drawing millions of visitors a year.

Lincoln in New Orleans: The 1828-1831 Flatboat Voyages and Their Place in History (Paperback)

Lincoln in New Orleans: The 1828 1831 Flatboat Voyages and Their Place in History reconstructs, to levels of detail and analyses never before attempted, the nature of those two journeys and examines their influence on Lincoln's life, presidency, and subsequent historiography. It also sheds light on river commerce and New Orleans in the antebellum era.

Time and Place in New Orleans: Past Geographies in the Present Day (Hardcover)

New Orleans seems to occupy a special geography as unique as its spicy cuisine or its spirited jazz music.

New Orleans Then and Now (Hardcover)

Nearly 400 side-by-side photographs (many never before published) dating from 1847 to the present compare views as captured from the street, roof, and air in this visual exploration of the Crescent City.

The Photojournalism of Del Hall: New Orleans and Beyond, 1950s-2000s (Hardcover)

Del Hall stands as one of the few journalists able to chart their careers through the milestones and icons of the late twentieth century -- the civil rights movement, Vatican II, the Beatles' arrival in the United States, Martin Luther King, Jr., John F. Kennedy, the1968 Chicago Riots, the Vietnam War, the rise and fall of the Berlin Wall.