The story of Louis Armstrong’s later years is the great untold tale of postwar jazz. Now Ricky Riccardi has told it to perfection. What a Wonderful World is a unique and indispensable landmark in Armstrong scholarship, a weathervane that will point the way to all future writings on his life and work.
—Terry Teachout, author of Pops: A Life of Louis Armstrong 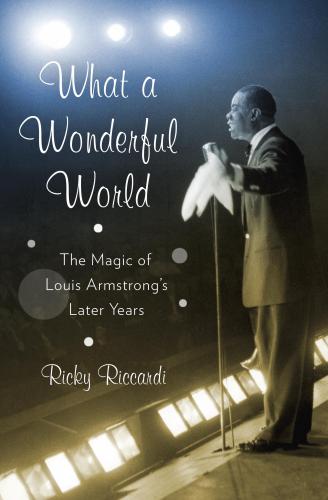 Please join us for a presentation and booksigning with Ricky Riccardi featuring his recent book WHAT A WONDERFUL WORLD: The Magic of Louis Armstrong’s Later Years.

Much has been written about Louis Armstrong, but the majority of it focuses on the early and middle stages of his long career. Now, Ricky Riccardi—jazz scholar and musician—takes an in-depth look at the years in which Armstrong was often dismissed as a buffoonish, if popular, entertainer, and shows us instead the inventiveness and depth of expression that his music evinced during this time.

These are the years (from after World War II until his death in 1971) when Armstrong entertained crowds around the world and recorded his highest-charting hits, including “Mack the Knife” and “Hello, Dolly!”; years when he collaborated with, among others, Ella Fitzgerald, Duke Ellington, and Dave Brubeck; when he recorded with strings and big bands, and, of course, with the All Stars, his primary recording ensemble for more than two decades. Riccardi makes clear that these were years in which Armstrong both burnished and enhanced his legacy as one of jazz’s most influential figures.

Eminently readable, informative, and insightful, here, finally, is a book that enlarges and completes our understanding of a peerless musical genius of commanding influence as both an instrumentalist and a vocalist.

Ricky Riccardi holds a B.A. in journalism and an M.A. in Jazz History and Research from Rutgers University. He has lectured at the Institute of Jazz Studies, at the National Jazz Museum in Harlem, and at the annual Satchmo SummerFest in New Orleans. He is the author of a popular Armstrong blog (dippermouth.blogspot.com) and is himself a jazz pianist. He is the project archivist for the Louis Armstrong House Museum. He lives in New Jersey.

What a Wonderful World: The Magic of Louis Armstrong's Later Years (Hardcover)

Prodigiously researched and richly detailed, this is a comprehensive account of the remarkable final twenty-five years of the life and art of one of America’s greatest and most beloved musical icons.