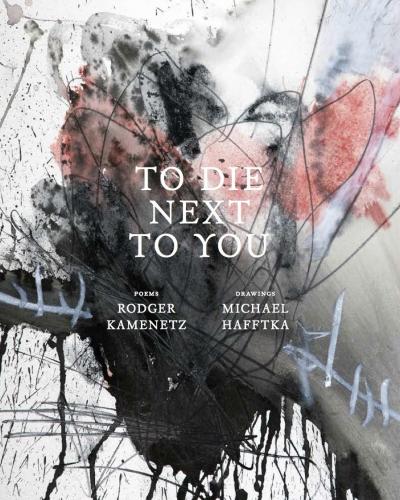 Please join us for a reading and signing with writer Rodger Kamenetz celebrating the release of his new book of poetry. Each poem in this beautiful book is illustrated by painter Michael Hafftka.

TO DIE NEXT TO YOU is a unique event in the literary and artistic world.  Two brother artists, both nurtured by the dream world and its imaginal colors and sacred words, have joined to produce a single work of rare quality. More than a collaboration, this work is a journey into the power of the unconscious depth of word and image, in which master painter and poet present verbal and visual displays of agony and joy, destruction and falling, love and dying.

This project has taken ten years to produce. From the encounter with his dreams narrated in The History of Last Night's Dream, Kamenetz produced a series of poems in a startling new idiom.  Then over a three year period, Michael Hafftka internalized the poems and reconstituted them in images that serve as imaginative midrash, annotation, anticipation and anti-illustration. The drawings offer brilliant first readings of the poems without limiting their scope.  It is equally possible to read the poems as reflections and interpretations of the drawings. The brilliant design of Andrew Shurtz allows the reader to move between worlds of poetry and painting, without losing trace of either one.

Praise for this new work has been overwhelming. Poet and art critic David Shapiro hails Kamenetz as "one of the secret best poets in America" and finds in his work "the fire in the heart of the great transcendental Romantics." Turning his eye to Hafftka's "fabulous anti-illustrations" he compares the artist to Soutine and Bacon and finds him "a humanist in the line of Walter Benjamin, Hannah Arendt and Meyer Shapiro." John Yau, another greatly accomplished poet and art critic, says that Kamenetz has sent us poems that "are mysterious and open- both parable and their opposite, anti-parable", while Hafftka "with pen and ink" "registers the turmoil of being afflicting the inhabitants of the strange world called Now. " Together poet and artist have "achieved the miraculous."

AFTER AFTER - "I saw the word poetry cover poetry..." Click here for a preview.

Rodger Kamenetz is an award-winning poet, author and teacher. Of his ten books, his best known is The Jew in the Lotus, the story of rabbis making a holy pilgrimage through India to meet with the Dalai Lama. When The History of Last Night's Dream appeared in 2007, Oprah Winfrey interviewed him on her "Soul Series" program, saying, "What's so exciting about this book is that it talks about how there's a whole other life that we are living when we sleep and that our dreams are there as offerings and gifts to us if we only recognize what the dreams are there to teach us."

Born in Baltimore, Rodger Kamenetz has degrees from Yale, Johns Hopkins and Stanford. He held a dual appointment at LSU as a Professor of English and Professor of Religious Studies and founded the MFA program in creative writing and the Jewish Studies minor. He retired as LSU Distinguished Professor and Sternberg Honors Chair Professor. He lives in New Orleans where he devotes himself now to his work with clients who seek spiritual direction through dreams.

To Die Next to You (Paperback)

Poetry. Art. TO DIE NEXT TO YOU, poems by Rodger Kamenetz/ drawings by Michael Hafftka is a unique event in the literary and artistic world. Two brother artists, both nurtured by the dream world and its imaginal colors and sacred words, have joined to produce a single work of rare quality.