“Funny…odd, original, and nearly unclassifiable…Unlike any other novel I can think of.” —David Haglund, The New York Times Book Review 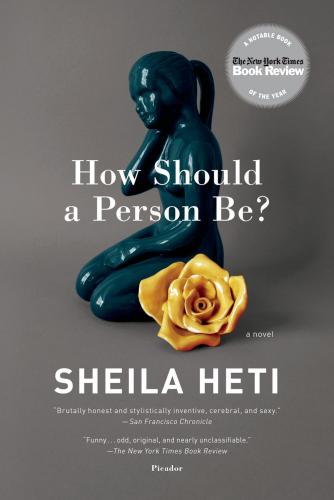 Please join us for an evening with author Sheila Heti celebrating the paperback edition of HOW SHOULD A PERSON BE? with a reading and book signing.

Hailed as “a breakthrough” (Chris Kraus, Los Angeles Review of Books) for the critically acclaimed Sheila Heti, HOW SHOULD A PERSON BE? is an unabashedly honest and hilarious tour through the unknowable pieces of one woman’s heart and mind. It has ignited conversation and earned Heti comparisons to Joan Didion, Henry Miller, Kathy Acker, and Gustave Flaubert.

Part literary novel, part self-help manual, and part bawdy exploration of the artistic impulse, it shocked and excited critics and readers with its raw, urgent depiction of female friendships and of the shape of our lives right now. In a novel “unlike any other,” Heti breathes new life into the essential questions: What is the most noble way to love? What kind of person should you be?

“A vital and funny picture of the excitements and longueurs of trying to be a young creator in a free, late-capitalist Western City.”
—James Wood, The New Yorker

“One of the bravest, strangest, most original novels I’ve read this year.”
—Christopher Boucher, The Boston Globe

“I read this eccentric book in one sitting, amazed, disgusted, intrigued...but always in awe.”
—Alan Cheuse, NPR’s All Things Considered

Sheila Heti is the author of several books of fiction, including The Middle Stories and Ticknor; and an essay collection written with Misha Glouberman, The Chairs Are Where the People Go. Her writing has been translated into ten languages and her work has appeared in The New York Times, Bookforum, McSweeney's, n+1, The Guardian, and other places. She works as interviews editor at The Believer magazine and lives in Toronto.

How Should a Person Be?: A Novel from Life (Paperback)