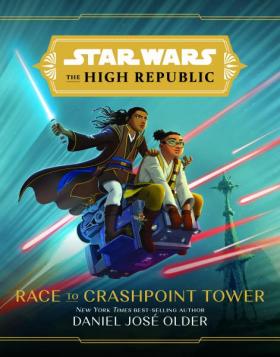 To participate in this event via Zoom, please pre-purchase Daniel José Older's Star Wars The High Republic: Race to Crashpoint Tower from Octavia Books at https://www.octaviabooks.com/book/9781368060660 and we will send you registration details by the date of the event.

Both titles will be signed by the authors.

Another exciting story in the #1 New York Times best-selling series!

The Republic Fair is coming! Visitors from all over the galaxy are traveling to the planet Valo for a massive, awe-inspiring festival celebrating the Republic. While his fellow Valons prepare for the fair, Jedi Padawan Ram Jomaram is hiding out in his favorite place: a dingy garage filled with mechanical parts and tools. But when a security alarm goes off on the nearby hilltop nicknamed Crashpoint Peak, he ventures out with his trusty droid V-18 to investigate. There he discovers that someone has knocked out Valo’s communications tower—a frightening sign that Valo, and the Republic Fair, are in danger. Sure enough, as Ram races to warn the Jedi, the dreaded Nihil unleash a surprise attack! It’s up to Ram to face down the enemy at Crashpoint Tower and send a call for help to the Republic. Luckily, he’s about to get some assistance from unexpected new friends… 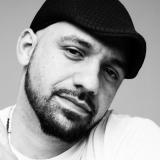 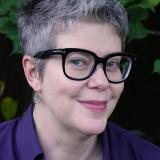 Claudia Gray is the author of Star Wars The High Republic: Into the Dark; Star Wars: Bloodline; Star Wars: Lost Stars; Star Wars: Leia, Princess of Alderaan; and Defy the Stars, as well as the Firebird series, the Evernight series and the Spellcaster series. She has worked as a lawyer, a journalist, a disc jockery, and a particularly ineffective waitress. Her lifelong interests include old houses, classic movies, vintage style, and history. She lives in New Orleans.

Another exciting story in the #1 New York Times best-selling series!

Star Wars The High Republic: Into the Dark (Hardcover)

The instant New York Times best-seller!
Long before the First Order, before the Empire, before even The Phantom Menace...Jedi lit the way for the galaxy in The High Republic.

Centuries before the events of the Skywalker Saga, the galaxy is
experiencing unparalleled peace—until a new enemy threatens
everything the Jedi have built.

NEW YORK TIMES BESTSELLER • Han Solo and Lando Calrissian are reunited on the Millennium Falcon in a galaxy-spanning novel inspired by Solo: A Star Wars Story. But even the fastest ship in the universe can’t outrun the past. . . .

NEW YORK TIMES BESTSELLER • An unexpected offer threatens the bond between Qui-Gon Jinn and Obi-Wan Kenobi as the two Jedi navigate a dangerous new planet and an uncertain future in the first canon Star Wars novel to take place before the events of Star Wars: The Phantom Menace.

Explore the beginning of Leia's participation in the Rebellion and the origin of her friendship with Amilyn Holdo from The Last Jedi!

NEW YORK TIMES BESTSELLER • From the author of Star Wars: Lost Stars comes a thrilling novel set in the years before the events of Star Wars: The Force Awakens.

From Claudia Gray, New York Times best-selling author! This thrilling Young Adult novel gives readers a macro view of some of the most important events in the Star Wars universe, from the rise of the Rebellion to the fall of the Empire.

NEW YORK TIMES BESTSELLER • The heroes of the High Republic era return to face a shattered peace and a fearsome foe, following the dramatic events of Light of the Jedi.

Star Wars The High Republic: Out of the Shadows (Hardcover)

Another exciting adventure from the #1 New York Times best-selling series!

The darkest secrets are the hardest to bring to light....

#1 NEW YORK TIMES BESTSELLER • Long before the First Order, before the Empire, before even The Phantom Menace . . . Jedi lit the way for the galaxy in The High Republic

Star Wars: The High Republic Vol. 1: There is No Fear (Paperback)

A new era of Star Wars storytelling begins! Journey back to the High Republic — the golden age of the Jedi! Centuries before the Empire and the Skywalker saga, the Jedi are at their height, protecting the galaxy as Republic pioneers push out into new territories.

Star Wars The High Republic: A Test of Courage (Hardcover)


Long before the Clone Wars, the Empire, or the First Order, the Jedi lit the way for the galaxy in a golden age known as the High Republic!

It is the era of the High Republic and expansion across the stars is at its height.

Star Wars The High Republic: Showdown at the Fair (Paperback)

Long before the Clone Wars, the Empire, or the First Order, the Jedi lit the way for the galaxy in a golden age known as the High Republic!

This exciting full-color storybook brings to life an epic clash between the Jedi Knights and their mysterious enemies, the Nihil. Burryaga the Wookiee Padawan and his fellow Jedi must save the day!

As the galaxy prepares to celebrate the Republic Fair on Valo, a fierce battle rages in the depths of Wild Space — and the Jedi of Starlight Beacon must join forces with their most feared enemy to face the terror of the unstoppable Drengir horde!

Welcome to Flood City, the last inhabitable place left above the waters that cover Earth.

As the Empire and the Rebellion clash, the galaxy trembles!
In the wake of the obliteration of Alderaan, Thane's faith in the Empire is shaken, while the destruction of the Death Star that soon follows gives Ciena a reason to rededicate herself to the side she's chosen.

The never-before-told story of how young Leia Organa comes to join the rebellion against the evil Empire.

The Empire can be seductive, particularly if you're an aspiring young pilot...

Thane Kyrell and Ciena Ree both know this very well when they enroll Imperial Academy, eager to pursue their dreams. When Thane discovers the darker side of the Empire, though, and defects to the Rebellion, the pair's lifelong friendship will be put to the ultimate test.