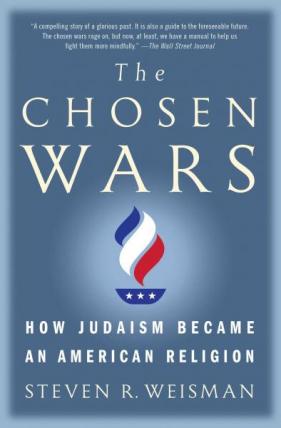 Join us at the New Orleans JCC when Steven R. Weisman presents his recent book, THE CHOSEN WARS: How Judaism Became an American Religion in conversation with Walter Isaacson. A booksigning will follow.

“An important beginning to understanding the truth over myth about Judaism in American history” (New York Journal of Books), Steven R. Weisman tells the dramatic story of the personalities that fought each other and shaped this ancient religion in America in the eighteenth and nineteenth centuries.

The struggles that produced a redefinition of Judaism illuminate the larger American experience and the efforts by all Americans to reconcile their faith with modern demands. The narrative begins with the arrival of the first Jews in New Amsterdam and plays out over the nineteenth century as a massive immigration takes place at the dawn of the twentieth century.

First there was the practical matter of earning a living. Many immigrants had to work on the Sabbath or traveled as peddlers to places where they could not keep kosher. Doctrine was put aside or adjusted. To take their places as equals, American Jews rejected their identity as a separate nation within America. Judaism became an American religion.

These profound changes did not come without argument. Steven R. Weisman’s “lucid and entertaining” (Publishers Weekly, starred review) The Chosen Wars tells the stories of the colorful rabbis and activists—including Isaac Mayer Wise, Mordecai Noah, David Einhorn, Rebecca Gratz, and Isaac Lesser—who defined American Judaism and whose disputes divided it into the Reform, Conservative, and Orthodox branches that remain today. “Only rarely does an author succeed in writing a book that reframes how we perceive our own history. The Chosen Wars is...fascinating and provocative” (Jewish Journal).

Steven R. Weisman, vice president for publications and communications at the Peterson Institute for International Economics (PIIE), previously served as a correspondent, editor, and editorial board member at The New York Times. His book The Great Tax Wars: How the Income Tax Transformed America, received the Sidney Hillman Award in 2003.

The Chosen Wars: How Judaism Became an American Religion (Paperback)

“An important beginning to understanding the truth over myth about Judaism in American history” (New York Journal of Books), Steven R.