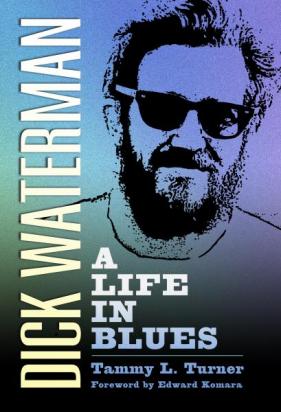 We hope you will join us for a presentation and signing with author Tammy L. Turner featuring DICK WATERMAN: A Life in Blues, her new biography of the renowned manager of Son House, Mississippi Fred McDowell, Buddy Guy, and Bonnie Raitt, who worked with a host of other iconic blues artists.

Growing up in an affluent Jewish family in Plymouth, Massachusetts, Dick Waterman (b. 1935) was a shy, stuttering boy living a world away from the Mississippi Delta. Though he never heard blues music at home, he became one of the most influential figures in blues of the twentieth century.

A close proximity to Greenwich Village in the 1960s fueled Waterman's growing interest in folk music and led to an unlikely trip that resulted in the rediscovery of Delta blues artist Son House in 1964. Waterman began efforts to revive House's music career and soon became his manager. He subsequently founded Avalon Productions, the first management agency focused on representing black blues musicians. In addition to booking and managing, he worked tirelessly to protect his clients from exploitation, demanded competitive compensation, and fought for royalties due them.

During his career, Waterman befriended and worked with numerous musicians, including such luminaries as B. B. King, Buddy Guy, Bonnie Raitt, Taj Mahal, and Eric Clapton. During the early years of his career, he documented the work of scores of musicians through his photography and gained fame as a blues photographer. This authorized biography is the crescendo of years of original research as well as extensive interviews conducted with Waterman and those who knew and worked with him.

TAMMY L. TURNER holds a doctoral degree in music history from the University of Mississippi. She teaches a variety of university courses in music history. Her area of interest is twentieth-century music including blues, jazz, rock 'n' roll, and classical music.

Dick Waterman: A Life in Blues (American Made Music) (Hardcover)

A biography of the renowned manager of Son House, Mississippi Fred McDowell, Buddy Guy, and Bonnie Raitt, who worked with a host of other iconic blues artists.