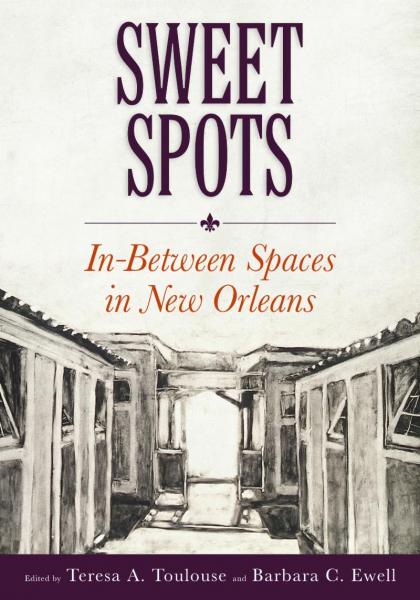 One has to think in New Orleans because New Orleans thinks itself in everyone living there. This splendid collection is a grand demonstration of how the city thinks with people who think. The more brilliant the thinkers, the greater the collaboration. This is a lasting effort.”
— Andrei Codrescu , author of New Orleans, Mon Amour: Twenty Years of Writings from the City

Much has been written about New Orleans's distinctive architecture and urban fabric, as well as the city's art, literature, and music. There is, however, little discussion connecting these features. Sweet Spots--a title drawn from jazz musicians' name for the space "in-between" performers and dancers where music best resonates--provides multiple connections between the city's spaces, its complex culture, and its future.

Drawing on the late Tulane architect Malcolm Heard's ideas about "interstitial" spaces, this collection examines how a variety of literal and represented "in-between" spaces in New Orleans have addressed race, class, gender, community, and environment. As scholars of architecture, art, African American studies, English, history, jazz, philosophy, and sociology, the authors incorporate materials from architectural history and practice, literary texts, paintings, drawings, music, dance, and even statistical analyses. Interstitial space refers not only to functional elements inside and outside of many New Orleans houses-- high ceilings, hidden staircases, galleries, and courtyards--but also to compelling spatial relations between the city's houses, streets, and neighborhoods.

Rich with visual materials, Sweet Spots reveals the ways that diverse New Orleans spaces take on meanings and accrete stories that promote certain consequences both for those who live in them and for those who read such stories. The volume evokes, preserves, criticizes, and amends understanding of a powerful and often-missed feature of New Orleans's elusive reality.