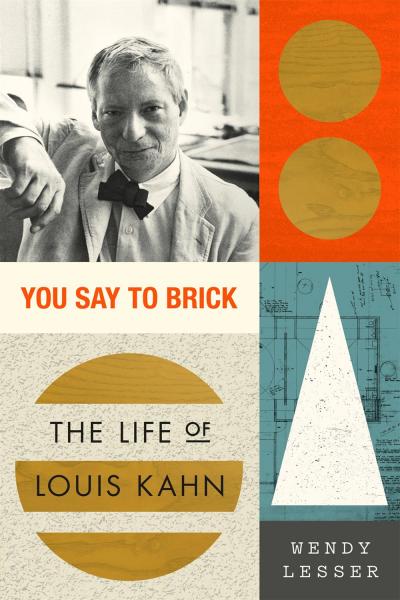 Join us in partnership with the Louisiana Archeticture Foundation for a special book talk and signing in with award-winning author Wendy Lesser featuring YOU SAY BRICK: The Life Of Louis Kahn. The event will take place at the Broad Theater in theater #2. FREE and open to the public.

Ms. Lesser will be joined in discussion with John Klingman, Professor Emeritus of Architecture at Tulane University.

One of the Washington Post's 50 Notable Works of Nonfiction in 2017, a New York Times Notable Book of 2017, and one of Kirkus's Best Nonfiction Books of 2017

Born in Estonia 1901 and brought to America in 1906, the architect Louis Kahn grew up in poverty in Philadelphia. By the time of his mysterious death in 1974, he was widely recognized as one of the greatest architects of his era. Yet this enormous reputation was based on only a handful of masterpieces, all built during the last fifteen years of his life.

Wendy Lesser’s You Say to Brick: The Life of Louis Kahn is a major exploration of the architect’s life and work. Kahn, perhaps more than any other twentieth-century American architect, was a “public” architect. Rather than focusing on corporate commissions, he devoted himself to designing research facilities, government centers, museums, libraries, and other structures that would serve the public good. But this warm, captivating person, beloved by students and admired by colleagues, was also a secretive man hiding under a series of masks.

Kahn himself, however, is not the only complex subject that comes vividly to life in these pages. His signature achievements—like the Salk Institute in La Jolla, the National Assembly Building of Bangladesh, and the Indian Institute of Management in Ahmedabad—can at first seem as enigmatic and beguiling as the man who designed them. In attempts to describe these structures, we are often forced to speak in contradictions and paradoxes: structures that seem at once unmistakably modern and ancient; enormous built spaces that offer a sense of intimate containment; designs in which light itself seems tangible, a raw material as tactile as travertine or Kahn’s beloved concrete. This is where Lesser’s talents as one of our most original and gifted cultural critics come into play. Interspersed throughout her account of Kahn’s life and career are exhilarating “in situ” descriptions of what it feels like to move through his built structures.

Drawing on extensive original research, lengthy interviews with his children, his colleagues, and his students, and travel to the far-flung sites of his career-defining buildings, Lesser has written a landmark biography of this elusive genius, revealing the mind behind some of the twentieth century’s most celebrated architecture.

Wendy Lesser is the founder and editor of The Threepenny Review and the author of a novel and several books of nonfiction, including Music for Silenced Voices and Why I Read, which garnered rave reviews from coast to coast. She has written for The New York Times Book Review, the London Review of Books, The Times Literary Supplement, and other publications. To complete You Say to Brick, she received one of the first National Endowment for the Humanities Public Scholar awards.

John Klingman is frequently called upon by local and national media to discuss architecture in New Orleans, he is a regular architecture critic in the city, writing an annual "Best of New New Orleans Architecture” article since 1997 for New Orleans Magazine. His 2012 book, NEW IN NEW ORLEANS ARCHITETURE, highlights eighty outstanding contemporary projects. He is a founding member of DOCOMOMO/NO, he has been active in seeking to provide commentary and preserve outstanding buildings from the mid twentieth century. In 2010 he was featured on NPR and in Evan Mather’s film “A Plea for Modernism” regarding the Phyllis Wheatley School demolition. In 2017 he was featured in the documentary film, Designing Life: The Modernist Architecture of Albert C. Ledner.

A special thanks to the Louisiana Architecture Association of inviting Octavia Books to be part of the event and tp  Wisznia Architecture + Development for sponsoring Ms. Lesser's accommodations.

You Say to Brick: The Life of Louis Kahn (Hardcover)

To pre-order a book to be picked up at the event, select "pickup at store" rather than shipping, and write "pickup at Broad Theater event" in the customer comment box during checkout.  If you cannot attend the event, you may select a shipping option and write "signed copy, not attending."

You Say to Brick: The Life of Louis Kahn (Paperback)

To pre-order a book to be picked up at the event, select "pickup at store" rather than shipping, and write "pickup at Broad Theater event" in the customer comment box during checkout.  If you cannot attend the event, you may select a shipping option and write "signed copy, not attending."