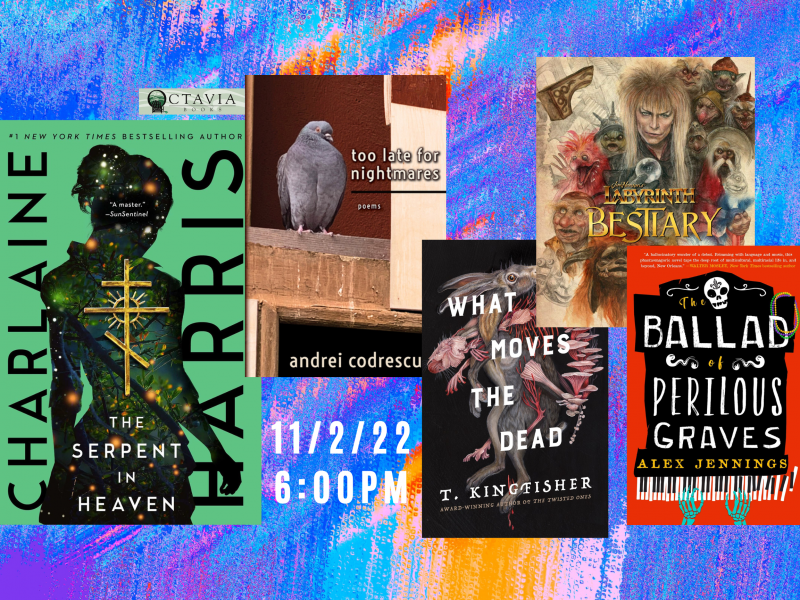 Please join us for readings and a book launch with an outstanding cast of authors who are arriving in town for the World Fantasy Convention. We are especially excited to be featuring Charlaine Harris for the early book launch of her new novel, THE SERPENT OF HEAVEN, a couple of weeks before the official on sale date. Joining her will be esteemed authors Andrei Codrescu reading from TOO LATE FOR NIGHTMARES, Alex Jennings reading from THE BALLAD OF PERILOUS GRAVES, Ursula Vernon/T. Kingfisher reading from WHAT MOVES THE DEAD and NETTLE AND BONE, and artist Iris Compiet presenting JIM HENSON'S LABYRINTH: BESTIARY and THE DARK CRYSTAL BESTIARY. Following the readings will be a reception and book signing.

Charlaine Harris is a New York Times bestselling author who has been writing for over thirty years. She was born and raised in the Mississippi River Delta area. She has written four series, and two stand-alone novels, in addition to numerous short stories, novellas, and graphic novels (cowritten with Christopher Golden). Her Sookie Stackhouse books have appeared in twenty-five different languages and on many bestseller lists. They’re also the basis of the HBO series True Blood. Harris now lives in Texas, and when she is not writing her own books, she reads omnivorously. Her house is full of rescue dogs.

Andrei Codrescu was born in Sibiu, Transylvania, Romania, and emigrated to the United States in 1966. He is the author of numerous novels, poems, and essays. He founded Exquisite Corpse: a Journal of Books and Ideas. He was a regular commentator on NPR’s All Things Considered. He taught literature and poetry at Johns Hopkins University, the University of Baltimore, and Louisiana State University.

Alex Jennings is a teacher, author, and performer living in New Orleans. His writing has appeared in strangehorizons.com, podcastle, The Peauxdunque Review, Obsidian Lit, the Locus Award-winning Luminescent Threads: Connections to Octavia Butler, and in numerous anthologies. His debut collection, Here I Come and Other Stories was released in 2012. He also serves as MC and co-producer of Dogfish, a monthly literary readings series. He is a graduate of Clarion West (2003) and the University of New Orleans. He was born in Wiesbaden (Germany) and raised in Gaborone (Botswana), Paramaribo (Surinam), and Tunis (Tunisia) as well as the United States. He is an afternoon person.

T. KINGFISHER writes fantasy, horror, and occasional oddities, most recently including The Twisted Ones and Swordheart. As Ursula Vernon, she also writes bestselling children's books. She lives in North Carolina with her husband, dogs, and chickens who may or may not be possessed.

Iris Compiet is an award winning traditional artist and Illustrator from the Netherlands. Drawing inspiration from European folklore, mythology, fairytales, ghost stories and anything from tombstones, Victorian photography to popular movies and music she explores the depths of darkness to find the light. Storytelling is an essential part of her artwork, and as an artist she strives to lure in the spectator, to make them feel a connection to the work and open a gateway to their imagination to ignite it even further. She is the creator of a world called Faeries of the Faultlines, a book which has been published by Eye of Newt Books in 2021. She has worked for clients such as Netflix, Magic the Gathering, Harper Collins and Insight Editions for which she illustrated the Dark Crystal Bestiary and the Labyrinth Bestiary

#1 New York Times and USA TODAY bestselling author Charlaine Harris returns to her alternate history of the United States where magic is an acknowledged but despised power in this fourth installment of the Gunnie Rose series.

Felicia, Lizbeth Rose’s half-sister and a student at the Grigori Rasputin school in San Diego—capital of the Holy Russian Empir

Too Late for Nightmares: Poems (Paperback)

The Ballad of Perilous Graves (Hardcover)

"A wild and wonderful debut, teeming with music, family and art."—New York Times

"Magical, lyrical, gritty, otherworldly…hype like Bayou Classic in the 90s."—P.

What Moves the Dead (Hardcover)

Jim Henson's Labyrinth: Bestiary: A Definitive Guide to the Creatures of the Goblin King's Realm (Hardcover)

Discover the world of Labyrinth in this guide to the wondrous creatures of the Goblin King’s realm, featuring illustrations by acclaimed artist Iris Compiet.

From Ludo to Sir Didymus, to the Goblin King’s legion of mischievous minions, Jim Henson’s Labyrinth is packed with wondrous beings and chaotic critters.

Discover the wild and wonderful creatures of Thra in this guide to the flora and fauna of the Dark Crystal universe featuring remarkable original illustrations.

In a world where rocks talk and trees dispense wisdom from across the ages, anything is possible.

Don’t Turn Out the Lights: A Tribute to Alvin Schwartz's Scary Stories to Tell in the Dark (Paperback)

Featuring stories from R.L. Stine and Madeleine Roux, this middle grade horror anthology, curated by New York Times bestselling author and master of macabre Jonathan Maberry, is a chilling tribute to Alvin Schwartz’s Scary Stories to Tell in the Dark.

For two decades NPR commentator Andrei Codrescu has been living in and writing about his adopted city, where, as he puts it, the official language is dreams.