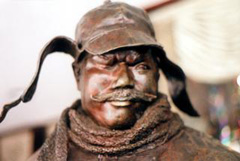 In the waning days of summer, 2005, a storm with greater impact than the bomb that struck Hiroshima peels the face off southern Louisiana.

This is the gruesome reality Iberia Parish Sheriff's Detective Dave Robicheaux discovers as he is deployed to New Orleans.

"New Orleans Noir explores the dark corners of our city in eighteen stories, set both pre- and post-Katrina...In Julie Smith, Temple found a perfect editor for the New Orleans volume, for she is one who knows and loves the city and its writers and knows how to bring out the best in both...It's harrowing reading, to be sure, but it's pure page-turning pleasure, too."

This wildly inventive comic masterpiece exploded on the literary scene like a time bomb in 1980. The rest is publishing history. Critics and readers adored "A Confederacy of Dunces, " and the book went on to win the Pulitzer Prize. edition. A Confederacy of Dunces is an American comic masterpiece. John Kennedy Toole's hero, one Ignatius J. Reilly, is "huge, obese, fractious, fastidious, a latter-day Gargantua, a Don Quixote of the French Quarter. His story bursts with wholly original characters, denizens of New Orleans' lower depths, incredibly true-to-life dialogue, and the zaniest series of high and low comic adventures" (Henry Kisor, Chicago Sun-Times).

City of Refuge: A Novel (Hardcover)

Tom Piazza's WHY NEW ORLEANS MATTERS was the book that defined New Orleaneans' response to the Hurricane and the profound impact on our people and culture. Now, in CITY OF REFUGE, this brilliantly talented, award-winning writer reaches deeper and wider to offer a shattering, panoramic novel that traces the stories of two families -- one white and one black -- as lives are torn apart by the storm and then slowly stitched back together in its aftermath.

In August 2005, SJ Williams, a carpenter who has lived the Lower Ninth Ward all his life, is headed for a confrontation with his young nephew, Wesley, who has just been arrested for beating up his girlfriend. SJ's older sister Lucy, Wesley's mother, is a soulful mess beloved by everyone, but she has been unable to corral her son, and SJ fears he is about to be lost for good. Meanwhile, across town, Craig Donaldson, a Midwestern transplant and the editor of the city's (fictitious) Gumbo weekly newspaper, is facing deepening cracks in his own family. Craig's love for New Orleans music and culture brought them to the city, but his wife Alice's alarm at the city's crime, poverty, and bad schools has become an ever-widening wedge between her and Craig, and their two young children Annie and Malcolm.

When the storm breaks, and the levee with it, SJ's home is flooded and his family scattered

From the author of the New York Times bestseller Cane River comes the paperback debut of an epic work of fiction that tells the dramatic, intertwining story of two families and their struggles to make a place for themselves in a country deeply divided in the aftermath of the Civil War.

Two line cooks decide to open their own restaurant in New Orleans in the second book in the Rickey and G-Man series by novelist Poppy Z. Brite.

A masterful novel set in 1920s Louisiana, The Missing is the story of Sam Simoneaux, a floorwalker at a New Orleans department store. When a little girl is kidnapped on Sam’s watch he is haunted by guilt, grief, and ghosts from his own troubled past.

Winner of the 1961 National Book Award

The dazzling novel that established Walker Percy as one of the major voices in Southern literature is now available for the first time in Vintage paperback.

With comparisons to Flaubert, Chekhov, and Faulkner, O. Henry Award-winner John Biguenet earned wide acclaim for his debut short-story collection, The Torturer's Apprentice. In his astonishing first novel, Oyster, he demonstrates the same mastery of craft and rigor of vision that led critics across the country to join Robert Olen Butler in praising this "important new writer."

Jules Duchon was a real New Orleans vampire. Born and bred in the working-class Ninth Ward, bitten and smitten with the Big Easy. Driving through the French Quarter, stuck in a row of bumper-to-bumper cars that crept along Decatur Street like a caravan of bone-weary camels, Jules Duchon barely fit behind the steering wheel of his very big Cadillac taxicab. Even with the seat pushed all the way back.

Damn, he was hungry.

Jules stopped his cab, pressed the wobbly rocker switch that jerked the electric windows reluctantly to life, and stuck his head into the humid night air. "Hey, baby. You interested in some dinner?"

Set in southern Louisiana in the weeks preceding the great flood of 1927, this novel depicts a place and way of life about to be forever changed.

Branching across every genre, from mystery and romance to flash fiction and prose poetry, this anthology features the works by writers on the heart of New Orleans. It features Ellen Gilchrist, Richard Ford, Robert Olen Butler, Julie Smith, and Valerie Martin, among others. The characters in these works wander from the 18th-century New World.